From Bilateral Investment Treaties to Cooperation and Facilitation Investment Agreements: A Study of the Brazilian Experience 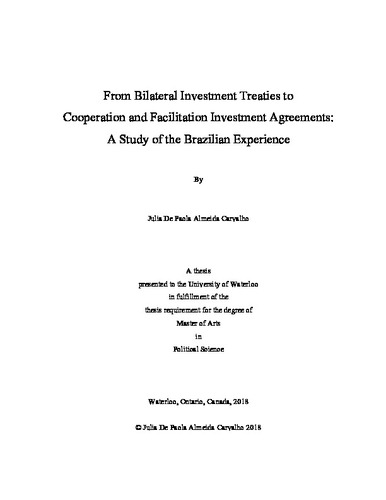 Bilateral investment treaties (BITs) provide rules to the flow of foreign direct investment between two countries. This type of agreement establishes the main terms and conditions under which individuals and companies of one country can make investments in the jurisdiction of another country. Brazil signed a number of BITs in the 1990s but did not ratify any of them. Since 2015, the Brazilian government has signed several new agreements, of which two have been ratified and are already in force. The other agreements seem to be following the same path towards ratification. This thesis seeks to explain this change. It argues that three factors have been crucial in bringing the success in ratification of this latest wave of agreements: 1) the reformulation of the investment agreements from the traditional template of BITs to the new template of Cooperation and Facilitation Investment Agreements (CFIAs); 2) the changing role of Brazil from an importer to both an importer and an exporter of capital; and 3) the extensive political organization, both inside and outside the government, to support the ratification of the agreements.