Spatial and Temporal Trends in Water Quality in a Mixed-Use Landscape: Agriculture vs. Urban Areas 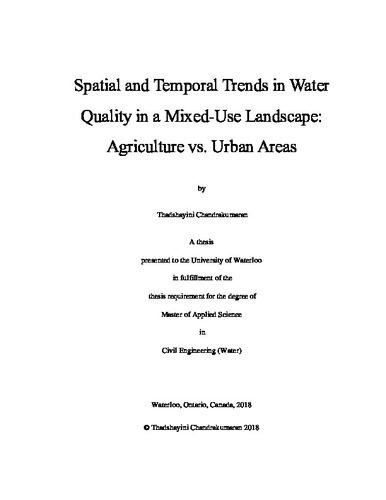 The eutrophication of aquatic ecosystems is a growing water quality concern as it can promote the proliferation of harmful algal blooms that have severe environmental, health, and economic impacts. In United States alone, it is estimated that the combined costs of the impact of cultural eutrophication is $2.2 billion. Phosphorus (P) is considered the primary limiting nutrient for algae in freshwater systems, and agriculture is generally recognized as the dominant source of P from the landscape. However, much less is known about the role of urban nonpoint source (NPS) P losses, in part due to the variety of land uses within these areas (residential, industrial, commercial, etc.). Therefore, considering that there is a projected increase in urbanization and a global recognition to reduce nutrient enrichment, a greater understanding of the role of urban areas in P transport is required. Here, water quality changes were investigated in an urbanized portion of the Grand River watershed at two different spatial scales: along the mainstem of the 7th order Grand River and the headwater reaches of Laurel Creek. The Weighted Regression on Time, Discharge, and Season (WRTDS) method was used to quantify how much total phosphorus (TP) and total suspended solids (TSS, as fine sediment is the primary vector for the transport of P) was transported to each reach. The variability in mass loads and yields due to random fluctuations in discharge were removed through flow-normalization so that water quality trends due to landscape changes could be evaluated. Key source areas were then identified by comparing temporal and spatial trends in water quality to trends in landcover using aerial imagery and GIS landcover data. There were similar findings at the two scales considered; urban areas have the potential to exceed the TP and TSS yields observed in agricultural areas as substantial deterioration of water quality was observed during the initial phases of construction (i.e., land clearing). However, once construction was completed, the water quality impacts declined. Although elevated TSS and TP yields after urbanization eventually improve, stream flows may remain elevated and more variable than those observed in reference catchments. At the smaller scale, while there was a 40% increase in stream flow in the reference catchment over the study period, the streamflow in the urbanized catchment increased by over 700%. The observed increases in stream flow were likely attributable to increased runoff from impervious groundcover and resuspension of river sediment (originating from urban sources) at higher stream flows. Therefore, urban areas have the potential to convey large mass loads of TSS and TP, even after their concentrations decrease. Accordingly, BMPs that focus on reducing runoff may be beneficial in developed areas. This study also emphasized that land use must be viewed as dynamic when assessing its impact on water quality, as the changes in land use themselves can drive changes in water quality. This was especially important in an area like the studied region where land that was historically agricultural, which may have legacy stores of P, is disturbed and converted to urban land. Lastly, multiple spatial scales should be used to investigate the effects of land use on water quality. At smaller spatial scales, potentially confounding factors such as differences in geology, soils, slope/aspect, vegetation type, and hydroclimatic variability can be effectively controlled to identify the effects of land use on water quality. The observations that are made at smaller spatial scales can then be validated at larger spatial scales to ensure that observed trends and processes do not represent only localized phenomena, but rather larger watershed-scale effects that can inform water management controls and priorities. Lastly, this investigation underscores the need for a coordinated monitoring effort to maximize the utility of monitoring data in decision-making. It is critical that various jurisdictional levels of government and other stakeholders communicate objectives and coordinate monitoring efforts to take advantage of economies of scale, reduce redundancies, and collect data that can be integrated meaningfully to address monitoring objectives.