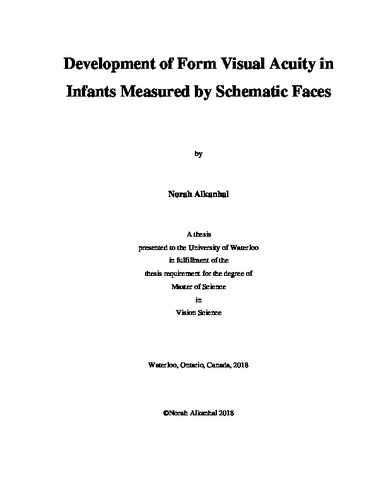 Purpose The purpose of this thesis was 1) to develop a test of visual acuity (VA) to measure recognition (form) acuity at a younger age than is currently clinically possible (3 years). Currently, it is only possible to measure resolution (grating) VA in this age group. 2) To validate infant’s recognition VA tests against gold standard ETDRS VA in adults. 3) To test the feasibility of using infant’s recognition VA tests to measure VA in infants 16 - 42 months of age in terms of the testability and ability to measure VA. Methods Preliminary study 1 – Development of Face targets: Adults participated and visual acuity for various versions of face targets were tested under blur in comparison to ETDRS or Tumbling E optotypes. The face targets were successively modified in six trials until the optimal agreement with ETDRS and Snellen Tumbling Es was obtained. Preliminary study 2 (Infants aged 3-15 months): In experiment 1, suprathreshold pairs of targets consisting of happy faces vs scrambled faces or happy faces vs dotted-target were presented either on preferential looking cards or on a computer screen with a non-contact gaze tracker. Percent accurate fixation towards the face compared to the non-face was observed by a naïve observer. In a second phase, habituation for the non-face stimuli were used in which the non-face target was presented twice before each face/non-face pair. Validation study (adults): A series of acuity cards with logarithmic progression in spacing and size (1.3 to -0.1 logMAR) designed for a 60 cm test distance was created. The Face Cards had a smiley face and a dotted target as optotypes. Patti Pics Cards used the house and the circle. Recognition VA was measured with Face Cards, Patti Pics Cards, and near ETDRS chart monocularly, in a counter-balanced order under 3 conditions of optical blur; +4.00D, +2.50D and no blur. Feasibility study (infants aged 16-42 months): Testability and form VA threshold were measured in infants on 2 visits using the Face Cards and Patti Pics Cards in a counter-balanced order. After initial training to point at the target stimulus (face or house), testability was measured using 30M target size with 3/4 correct responses as the criterion to be considered testable. If the infant was testable, two alternative forced choice VA measurement followed using a two down one up staircase procedure. For reference, testability for matching with the Patti Pics and VA with the Cardiff cards were measured. Results Preliminary study 1 – Development of Face targets: The modified border simple face was chosen as most suitable in terms of its apparent appeal as a face and similar results to ETDRS and tumbling Es. Preliminary study 2: Infants aged 3-15 months Eight infants took part in Phase 1 (median age 10.5 months, range 8.5 – 14 months). The percentage of correct looks with the eye tracker was not significantly different from 50% with either the cards or the eye tracker. Eleven infants participated in Phase 2 (median age 11.5 months, range 3.5 – 15 months). Percent correct looks was not significantly better with habituation. Validation study (adults): Twenty-two participants took part in this experiment, age range was 22 - 35 years, median age was 27 years. Repeated measure ANOVA showed a significant effect of VA method for all levels of blur (p<0.05). Post-hoc analysis showed that Patti Pics Cards gave significantly better VA than ETDRS and compared to Face Cards, but there was no significant difference between Face Cards and ETDRS. The same pattern of differences was found for all levels of blur. Feasibility study: (infants aged 16-42 months): Seventeen infants took part in this study, median age was 27 months. Testability of Face Cards was 70.5%, while the testability of the Patti Pics Cards and matching Patti Pics were both 64.7%. All participants aged ≥26 months could perform all three tests, including a VA result. Among infants in whom a measure of VA was obtained, a significant difference was found between Face Cards and Cardiff Cards (mean difference 0.35 logMAR, p=0.0007) and between Patti Pics Cards and Cardiff Cards (0.2 logMAR, p=0.049), while no significant difference was found between Face Cards and Patti Pics Cards (0.15 logMAR, p=0.15). Correlation between age and VA was; Face Cards r = 0.76 (p = 0.006), Patti Pics Cards r = 0.8 (p = 0.003), Cardiff Cards r = 0.72 (p = 0.001). Conclusion The preference for faces, even with habituation, was not sufficiently strong in babies aged 3 – 15 months to use for recognition visual acuity measurement. A pointing paradigm appears to have potential for children between 26 months and 3 years with either Face/non-face targets or Patti Pics symbols. However, in adults, Face Cards give VA more similar to ETDRS acuity than Patti Pics Cards and may provide a valuable alternative method for measuring recognition VA in young children. Recognition acuity increased with age over the infant range at a faster rate than resolution acuity.