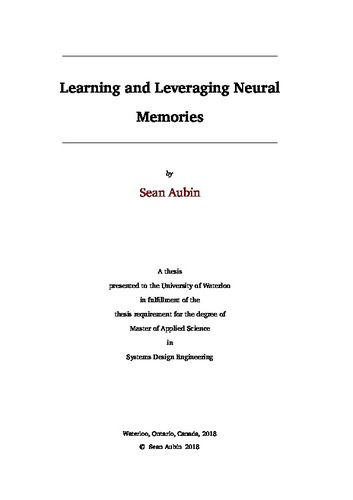 Learning in the Neural Engineering Framework (NEF) and the Semantic Pointer Architecture (SPA) has been recently extended beyond the supervised Prescribed Error Sensitivity (PES) to include the unsupervised Vector Oja (Voja). This thesis demonstrates how the combination of these learning rules can be used to learn associative memories. Moreover, these techniques are used to provide explanations of two behaving cognitive phenomena that are modeled with spiking neurons. First, the standard progression of cognitive addition strategies from counting to memorization, as occurs in children, is modelled as a transfer of skills. Initially, addition by counting is performed in the slow basal ganglia based system, before being overtaken by a rapid cortical associative memory as a type of pre-frontal, cortical consolidation. Second, a word-pair recognition task, where two distinct types of word-pairs are memorized, is modelled. The Voja learning rule is modified to match temporal lobe magnetoencephalography (MEG) data generated by each word-pair type observed during the task. This empirically grounds the associative memory model, which has not been possible using other cognitive modeling paradigms. The distinct implementation of Voja for each area, pre-frontal and temporal, demonstrates the different roles that the areas perform during learning.