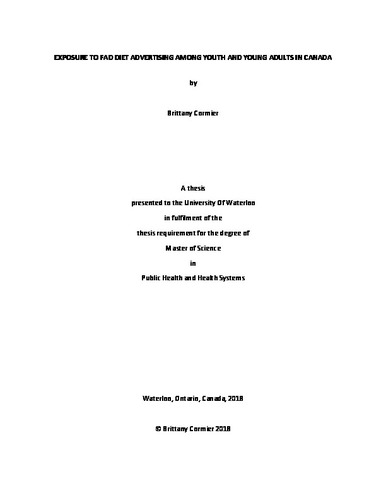 Background: The prevalence of obesity in Canada continues to increase. Although many Canadians report trying to manage their weight, few follow dietary guidelines recommended by health authorities. In contrast, many consumers use ‘fad’ diets to help with weight-loss. Fad diets are widely promoted as ‘quick and easy’ ways to lose weight, despite little evidence of efficacy and potential adverse health effects. A range of media sources, including traditional and digital media channels, are pervasive platforms for diet advertising, through which many young people are exposed to dieting trends and information that promotes unhealthy eating behaviours. Purpose: To date, there is little evidence on the extent to which young Canadians are exposed to advertising related to fad dieting, and the effect of fad diet advertising exposure on perceived diet risk, perceived diet effectiveness, and fad diet use. The current study aims to examine the relationship between exposure to fad dieting advertisements (ads), fad dieting behaviours, and perceptions of fad diet risk and effectiveness. Methods: Cross-sectional data were drawn from Wave 2 of the Canada Food Study, a national prospective cohort survey conducted annually to monitor eating patterns and trends among youth and young adults in Canada over time (n=932). Specifically, fad diets were examined including fasting and skipping meals, liquid diets, cleanses and detoxes, non-prescription diet pills, laxatives or vomiting, and smoking. Respondents from Wave 1 of the Canada Food Study were recruited in-person from one of five Canadian cities including Vancouver (BC), Edmonton (AB), Toronto (ON), Montreal (QC), and Halifax (NS), aged 16-32. Analysis: Respondents reported sociodemographic information, and information on: Weight Behaviour and Fad Diet Use; Ad Exposure; Ad Source; Response to Ad; Celebrity Promotion Status; Perceived Risk; and Perceived Effectiveness. Data were analysed using descriptive statistics, repeated measures linear and logistic regression models, and bivariate correlations. Results: Almost two-thirds of respondents (61.2%) reported exposure to a fad diet ad, and 1 in 5 reported using a fad diet in the past 12 months (20.9%). Respondents were most likely to report exposure to ads for cleanses and detoxes, and least likely to report exposure to ads for smoking and laxatives or vomiting. The internet and social media were the most common sources of ad exposure compared to other media sources. Exposure was greater among respondents who were female, had a higher BMI, and had adequate health literacy. Those exposed to fad diet ads were less likely to perceive them as risky (AOR=0.7, 95% CI=0.6, 0.8) and more likely to perceive them as effective (AOR=1.3, 95% CI=1.0, 1.6). In response to an ad, respondents most commonly reported that they were not interested in or ignored the ad for each diet type. Respondents with low body satisfaction and a higher number of symptoms of eating disorders were more likely to take action, such as engaging in fad diet behaviours or purchasing commercial diets, in response to ads. Respondents were more likely to report fasting or skipping meals compared to the other diet types, and less likely to report using liquid diets compared to cleanses or detoxes and non-prescription diet pills. Fad diet use was greater among respondents who were exposed to fad diet ads, female respondents, respondents with a higher BMI, and respondents with more symptoms of eating disorders. Bivariate correlations determined that perceptions of risk and perceptions of effectiveness were significantly associated with exposure to fad diet ads (χ2=12.5, χ2=5.7, respectively). Perceptions of risk and effectiveness were both associated with fad diet use: respondents who perceived fad diets as riskier were less likely to use fad diets (AOR=0.4, 95% CI=0.3, 0.6), and respondents who perceived fad diets as effective were more likely to use fad diets (AOR=4.4, 95% CI=3.1, 6.2) (p<0.05 for all). Conclusions: The findings suggest that many young urban Canadians report exposure to ads for fad diets, and many report using fad diets. Most respondents generally perceive fad diets as risky and ineffective; however, contrary to available research, a considerable amount perceived fad diets as safe and effective for weight-loss. Exposure to fad diet ads was associated with greater fad diet use, which may be mediated by perceptions of risk and effectiveness: ads may help to reassure young people that fad diets are both safe and an effective method for weight-loss. However, the current study uses cross-sectional data, and therefore it is unclear whether exposure to fad diet ads causes fad diet use, or whether those who are using fad diets are more likely to view and recall exposure to ads. If the former is true, then the relationship between fad diet ad exposure and use may warrant advertising regulations for commercial diets.