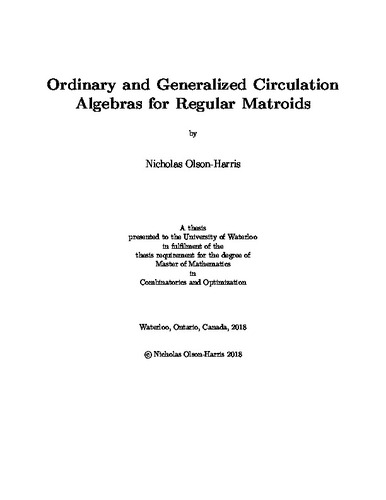 Let E be a finite set, and let R(E) denote the algebra of polynomials in indeterminates (x_e)_{e in E}, modulo the squares of these indeterminates. Subalgebras of R(E) generated by homogeneous elements of degree 1 have been studied by many authors and can be understood combinatorially in terms of the matroid represented by the linear equations satisfied by these generators. Such an algebra is related to algebras associated to deletions and contractions of the matroid by a short exact sequence, and can also be written as the quotient of a polynomial algebra by certain powers of linear forms. We study such algebras in the case that the matroid is regular, which we term circulation algebras following Wagner. In addition to surveying the existing results on these algebras, we give a new proof of Wagner's result that the structure of the algebra determines the matroid, and construct an explicit basis in terms of basis activities in the matroid. We then consider generalized circulation algebras in which we mod out by a fixed power of each variable, not necessarily equal to 2. We show that such an algebra is isomorphic to the circulation algebra of a "subdivided" matroid, a variation on a result of Nenashev, and derive from this generalized versions of many of the results on ordinary circulation algebras, including our basis result. We also construct a family of short exact sequences generalizing the deletion-contraction decomposition.