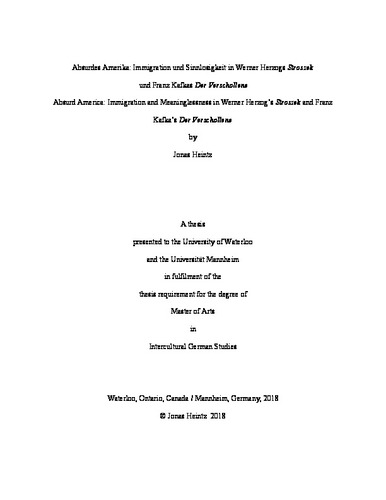 In this thesis I compare Franz Kafka‘s novel Der Verschollene with Werner Herzog‘s movie Stroszek by utilizing Albert Camus‘ philosophy of the absurd as a literary theory. The absurd ad dresses the problem of meaninglessness with the resulting feeling of disconnect, and the break down of connections with society, and transforms it into a live-affirming outlook. I will identify elements of the absurd in the two works and show how much the protagonists are conscious of it, as well as show their reactions to the absurd. I am doing this by analyzing the authors’ portrayal of immigration to the USA in regards to the absurd. America is used by the authors as a play ground to explore the idea of finding meaning and a sense of belonging somewhere through im migration. But the dream of becoming oneself turns into a nightmare of losing oneself. America turns out to be a dreadful place where antonomy and chaos reigns. Consequently, the protago nists fail in every regard, both professionally and in their personal relationships; they are alien ated from American society and cannot stake out a meaningful existence. The authors show this mainly through the use of circle motives of repetitions in continuously worsening strorylines. In the end, Bruno in Stroszek becomes conscious of the absurd, but he is unable to solve it and chooses suicide to escape his suffering. Karl in Der Verschollene is unable to recognize the ab surdity of his existence and he does not have to experience Bruno’s pain, yet he also has no chance of redemption.