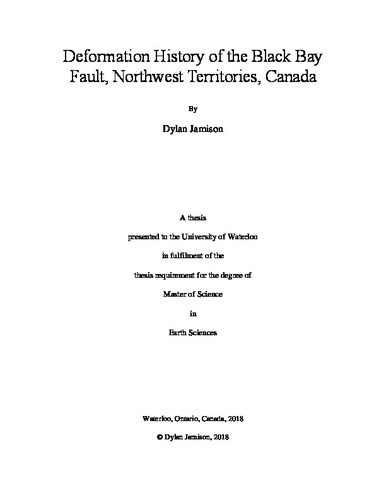 The Black Bay Fault is a major Paleoproterozoic, NE-SW-trending, crustal-scale feature that separates different tectonometamorphic domains of the southern Rae craton in the Canadian Shield. This structure extends from the edge of Lake Athabasca northward for 100’s km into the Northwest Territories and was previously poorly constrained. Prior examination of the fault has been limited to small-scale studies in the Uranium City, SK vicinity. The Black Bay fault has previously been associated with rare-earth element and uranium mineralization in northern Saskatchewan, although this relationship is not fully understood. This thesis has focused on understanding the continuation of the Black Bay Fault into the Northwest Territories based on field mapping conducted as part of the GSC/NTGS GEM2 South Rae project. The observations are broken into three study areas: Tazin River, Insula-Labyrinth Lake and Dymond Lake. The Black Bay Fault has had a cryptic polyphase history. Overall the fault is observed to be a steep, west-dipping structure associated with a strong NE/SW-trending fabric, but there are major disruptions to this trend by two NW-SE-trending segments of this fault. Field observations indicate it was impacted by four main deformational events, D1 to D4. D1 produced sinistral transpression along the fault, resulting in the uplift of the western domains relative to the eastern domains, a steeply west-dipping, NNE-SSW-trending gneissosity and shallowly NE-plunging lineations. D1 is inferred to have occurred ca. 1910 Ma in associated with the Snowbird Orogeny and the collision of the Hearne craton onto the eastern edge of the Rae Craton. D2 is a regionally limited event which modified the geometry of the fault rather than producing deformation along its length and resulted in the development of a left-stepping bend in the fault around Labyrinth Lake and another larger bend around Dymond Lake. D2 fabrics are not observed along the southern extent of the Black Bay Fault. This event remains very poorly constrained but is hypothesized to be associated with the indentation of the Slave craton into the Rae craton, further to the west, at ca. 1860 Ma. D3 was a dextral transpression event resulted in further west-side up movement on the primary Black Bay Fault trend and produced a steeply west-dipping, NE-SW-trending gneissic to mylonitic fabric along with shallowly SW-plunging lineation. D3 began by 1844.4 ±2.1 Ma continued until ca. 1830 Ma and was probably driven through far-field tectonic effects from the Trans-Hudson orogeny to the east. Differential uplift occurred during this event, with the fabrics becoming more ductile moving northward on the western side of the fault. D4 was a brittle-ductile to brittle deformation event associated with dextral movement along the fault and the development of a sinistral, NW-SE-trending conjugate fault/fracture system containing syn-tectonically emplaced mafic dykes. D4 was underway by ca. 1827 Ma and continued until at least ca. 1818 Ma. In addition, fault-associated rare-earth element and uranium mineralization previously discovered in northern Saskatchewan is observed to continue into the Northwest Territories, hosted primarily in S3 and S4 fabrics and possibly associated with the shift from a ductile regime to a brittle regime.