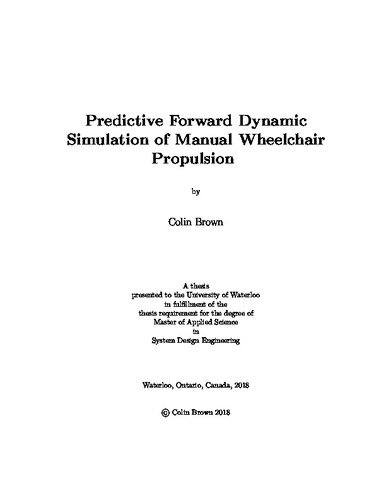 Approximately 200,000 Canadians require the use of a manual wheelchair to complete activities ranging from tasks of daily living to competing on elite sports teams. Research to understand the biomechanics of manual wheelchair propulsion has grown steadily in the last 30 years. Many of these studies have incorporated experimental data and mathematical models to advance this field of research. A range of models have been developed for use in inverse dynamic simulations, yet few have been used in predictive forward dynamic simulations, which have the benefit of requiring little to no experimental data. The purpose of this project was to test the feasibility of implementing a two-dimensional model to generate forward dynamic fully predictive computer simulations of a wheelchair basketball athlete on a stationary ergometer. The body segment inertial parameters used in the two-dimensional model were obtained from a projection parameter identification method using a validated three-dimensional inverse dynamic model developed by the Canadian Sports Institute Ontario (CSIO). Furthermore, subject-specific torque generator functions were developed through joint torque testing of an elite wheelchair basketball athlete on a Biodex System 4 Pro human dynamometer system. A direct collocation optimization technique using GPOPS-II was utilized to determine input torque functions that minimized the change in torque activations and hand forces to best replicate the human muscle recruitment strategy. Dynamic equations were generated using the multibody software MapleSim, and bounds for states and controls were determined from experimental data. Forward dynamic simulations were generated with varying initial conditions. Similar profiles and magnitudes of kinematic and kinetic data were observed between fixed final time simulations and CSIO experimental data of a sub-maximal first push. Additional simulations were generated that varied the seat position and used an additional objective function term that minimized push time to simulate a maximal effort from rest. These simulations resulted in push times that compared closely to experiment for the first push. Furthermore, seat heights inferior to the neutral experimental position were found to produce similar joint torque effects to those reported in previous modeling studies. An anterior seat placement to the neutral experimental position produced the quickest push time with the least amount of shoulder torque required. Variations in this model compared to those in literature, as well as the model parameter identification of only one subject, provided limited validation of these seat adjustment findings. However, the work completed in this project demonstrates that fully predictive simulations of wheelchair propulsion can produce realistic results, and shows the potential of varying simulation parameters to make meaningful conclusions. Future work should continue the validation of this method by testing more subjects and increasing the complexity of the model.