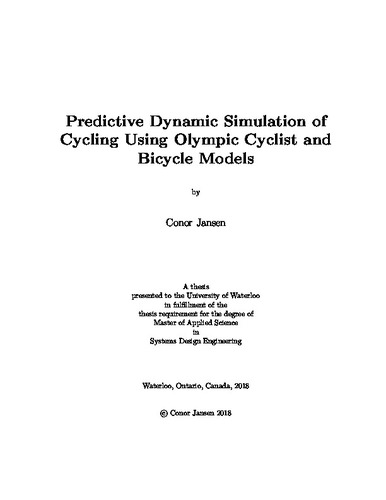 Predictive dynamic simulation is a useful tool for analyzing human movement and optimizing performance. Such simulations do not require experimental data collection and provide the opportunity to analyze a variety of potential scenarios. This presents interesting possibilities for investigating the optimal technique in sports applications, such as cycling. Much of the previous research on modeling and simulation of cycling has focused on seated pedaling and models the bicycle or ergometer with an e ective resistive torque and inertia. This study was focused on modeling standing starts, a component of certain track cycling events in which the cyclist starts from rest and attempts to accelerate to top speed as quickly as possible. A useful model would need to incorporate bicycle dynamics, including tire models, and complete cyclist dynamics, including the upper body. A ten degree-of-freedom, two-legged cyclist and bicycle model was developed using MapleSim and utilized for predictive simulations of standing starts. A joint torque model was incorporated to represent musculoskeletal dynamics, including scaling based on joint angle and angular velocity to represent the muscle force-length and force-velocity relationships. Tire slip for the bicycle model was represented by the Pacejka tire model for wheel-ground contact. GPOPS-II, a direct collocation optimal control software, was used to solve the optimal control problem for the predictive simulation. First, a modi ed version of this model was used to simulate ergometer pedaling. The model was validated by comparing simulated ergometer pedaling against ergometer pedaling performed by seven Olympic-level track cyclists from the Canadian team. A kinematic data tracking approach was used to assess the abilities of the model to match experimental data. Following the successful matching of experimental data, a purely predictive simulation was performed for seated maximal start-up ergometer pedaling with an objective function of maximizing the crank progress. These simulations produce joint angles, crank torque, and power similar to experimental results, indicating that the model was a reasonable representation of an Olympic cyclist. Subsequently, experimental data were collected for a single member of the Canadian team performing standing starts on the track. Data collected included crank torque, cadence, and joint kinematics. Predictive simulations of standing starts were performed using the combined cyclist and bicycle model. Key aspects of the standing start technique, including the drive and reset, were captured in the predictive simulations. The results show that optimal control can be used for predictive simulation with a combined cyclist and bicycle model. Future work to improve upon the current model is discussed.