Acyclic Colouring of Graphs on Surfaces 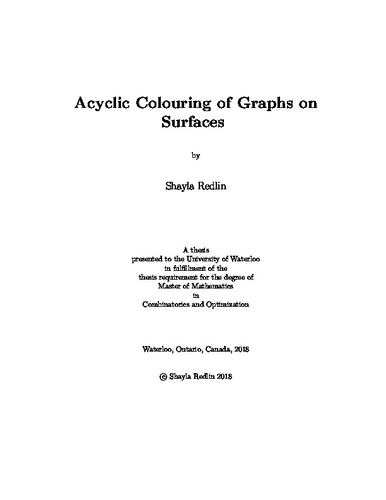 An acyclic k-colouring of a graph G is a proper k-colouring of G with no bichromatic cycles. In 1979, Borodin proved that planar graphs are acyclically 5-colourable, an analog of the Four Colour Theorem. Kawarabayashi and Mohar proved in 2010 that "locally" planar graphs are acyclically 7-colourable, an analog of Thomassen's result that "locally" planar graphs are 5-colourable. We say that a graph G is critical for (acyclic) k-colouring if G is not (acyclically) k-colourable, but all proper subgraphs of G are. In 1997, Thomassen proved that for every k >= 5 and every surface S, there are only finitely many graphs that embed in S that are critical for k-colouring. Here we prove the analogous result that for each k >= 12 and each surface S, there are finitely many graphs embeddable on S that are critical for acyclic k-colouring. This result implies that there exists a linear time algorithm that, given a surface S and large enough k, decides whether a graph embedded in S is acyclically k-colourable.