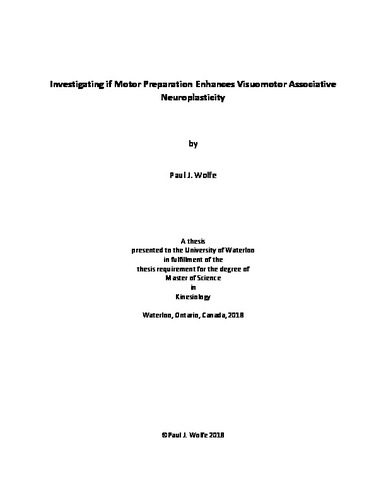 The human brain is known to be highly adaptive which has important implications for motor learning and recovery from neurologic injury. It has been shown that long term potentiation-like neuroplasticity can be experimentally induced via a protocol termed visual paired-associative stimulation (V-PAS) (Suppa et al, 2015). V-PAS can be used to investigate neuroplastic mechanisms and understand how additional variables interact to alter plasticity induction. Preparation of a reaching movement was used in this study as an additional variable to influence neuroplasticity induction. Research has shown the superior parietal occipital cortex (SPOC) is critically involved in orchestrating a reaching movement (Vesia et al, 2013). The present study combined these two findings to observe how reach preparation paired with V-PAS influenced the resultant plasticity induced. We hypothesized that: (1) V-PAS without reach preparation would exhibit comparable excitability changes to Suppa et al, (2) incorporation of reach planning during V-PAS would significantly increase excitability beyond that of V-PAS alone, (3) projections from SPOC to the primary motor cortex (M1) would be enhanced following V-PAS combined with reach preparation. Ten participants completed two experimental sessions in a repeated measures study design with observations of cortical excitability recorded prior to and following V-PAS. Session 1 implemented V-PAS alone (resting V-PAS) while session 2 incorporated reach preparation with V-PAS (active V-PAS). Results showed approximately half of the sample experienced facilitation of motor evoked potential amplitude (MEP) following V-PAS while the other half exhibited suppressed MEP sizes. The sample collectively did not show significant excitability change following V-PAS. However, when parsed out by V-PAS response (increased or decreased excitability), both groups observe dramatic effects of V-PAS in their respective direction. No effect of V-PAS condition was observed in either of these groups which suggests reach preparation as performed in this study does not enhance cortical excitability changes to a detectable degree. SPOC to M1 projections were found to increase MEP amplitudes during all timepoints and conditions. While not preparing a reach, MEP amplitudes were further enhanced to a similar degree following both V-PAS interventions. However, when participants prepared a reach during post-testing, MEP size was only increased following active V-PAS. These results may point to a region of premotor cortex whose projections to M1 are altered selectively by V-PAS incorporating reaching preparation. Our research serves to further develop early literature describing the V-PAS technique and guide future research in the field. In time, we hope this work will help elucidate currently unknown neuroplastic mechanisms which can then be translated into improving clinical outcomes.