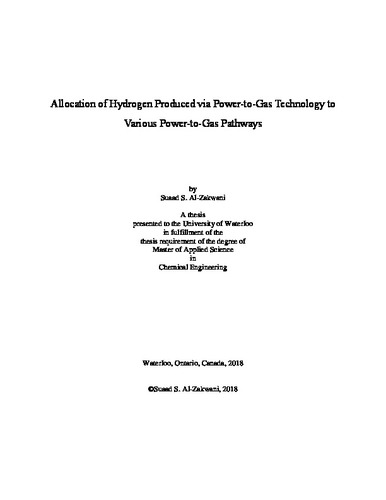 Demand for renewable energy systems is accelerating and will account for a significant share of future power systems aimed to enhance and decarbonize the world’s energy system. Unlike conventional power plants, electricity output from renewable sources cannot be adjusted easily to match consumer power demand because renewable resources are intermittent short-term seasonal power sources. Accordingly, a rapid increase in surplus power is expected in the future. The Canadian Province of Ontario, in line with global efforts, has targeted 80 % reduction of greenhouse gas emission levels by 2050 compared to 1990 levels. One key step to accomplish this goal is to harness more renewable energies for power generation. Instead of losing the surplus power or exporting it for low returns, storage and utilization in other sectors urgently need to be explored. Power-to-Gas technology offers a possible solution for optimal use of energy surplus. It is efficient at the huge — national— consumption scale and global acceptance of Power-to-Gas as energy storage and transportation technology is growing noticeably. In short, Power-to-Gas is a potential means to manage intermittent and weather-dependent renewable energies like wind, solar, or hydro in a storable chemical energy form. The main concept behind Power-to-Gas technology is to make use of surplus electricity to decompose water molecules into their primary components: hydrogen and oxygen. Power-to-Gas is not only a storage technology; its role can be extended to other energy streams including transportation, industrial use, injection into the natural gas grid as pure hydrogen, and renewable natural gas. The current study investigated four specific Power-to-Gas pathways: Power-to-Gas to mobility fuel, Power-to-Gas to industry, Power-to-Gas to natural gas pipeline for use as hydrogen-enriched natural gas, and Power-to-Gas to Renewable Natural Gas (i.e., Methanation). This study quantifies the hydrogen volumes at three production capacity factors (67%, 80%, and 96%) upon utilizing Ontario’s surplus electricity baseload. Five allocation scenarios (A-E) of the hydrogen produced to the four Power-to-Gas pathways are investigated and their economic and environmental aspects considered. Allocation scenario A in which hydrogen assigned to each pathway is constrained by a specific demand, is based on Ontario’s energy plans for pollution management in line with international efforts to reduce global warming impacts. Scenarios B-E are about utilization of the produced hydrogen entirely for one of mobility fuel, industrial feedstock, injection into the natural gas grid, or renewable natural gas synthesis, respectively. The study also examines the economic feasibility and carbon offset of the PtG pathways in each scenario. The research sets the assumption that hydrogen is produced at three capacity production factors: 67% (16 h/day), 80% (19 h/day), and 96% (23 h/day). The amount of surplus baseload electricity for 2017 of each capacity factor is converted to hydrogen via water electrolysis. Accordingly, the total hydrogen produced is approximately 170 kilo-tonnes (kt), 193 kt, and 227 kt, respectively. Results indicate that the Power-to-Gas to mobility fuel pathway in scenarios A and B has the potential to be implemented. Utilization of hydrogen produced via Power-to-Gas technology for refueling light-duty vehicles is a profitable business case with an average positive net present value of $4.5 billions, five years payback time, and 20% internal rate of return. Moreover, this PtG pathway promises a potential 2,215,916 tonnes of CO2 reduction from road travel. In the scenario to utilize Ontario’s surplus electricity to produce hydrogen via the PtG technology for industrial demand, results indicate that supply could achieve 82%, 93%, and 110% of the industrial demand for hydrogen at the three capacity factors, respectively. Nevertheless, hydrogen production through PtG is still costly compared to other available cheaper alternatives, namely hydrogen produced via steam methane reforming. Power-to-Gas for industry projects should, however, be part of government incentives to encourage clean energy utilization. In addition, although using hydrogen-enriched natural gas or renewable natural gas instead of the conventional natural gas could offset huge amounts of carbon, their capital and operational costs are extremely high, resulting in negative net present values and very long payback time.