Germans and German Brazilians: Discourses of Authenticity in Blumenau 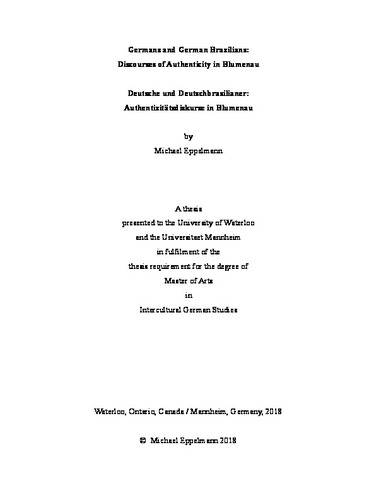 Between 1820 and 1940, more than 200,000 German-speaking Europeans emigrated to Brazil. One of the most famous German settlements to this day is Blumenau in the state of Santa Catarina. This thesis examines how and why the Germanness of the German Brazilians in Blumenau has been changing since the city’s foundation in 1850. Methodologically, this is undertaken by combining the findings of preexisting historical science research with the analysis of primary sources from the Blumenau region, specifically of newspaper articles and theatre plays. Three examined factors are ethnic Germanness, the usage of the German language as well as events and practices perceived to be German. These are deconstructed in the context of Jan Blommaert’s enoughness theory. Blommaert sees authenticity in an increasingly diverse world as a mere judgment based on a sum of alleged characteristics that can change in the course of time. The results of this research show that the Germanness of Blumenau has been challenged rather by the increasing heterogeneity of inhabitants with German descent themselves than by non-Germans who moved to the city in exceeding rates. Internal quarrels about German culture, with new German arrivals and National Socialism being major arguments, in addition to the opposed Brazilianization campaign of President Getúlio Vargas during the 1930’s and 1940’s, have decisively led to the attrition of the German language. Today, the Blumenau Germanness is mostly seen as the cause of the economic success of the city which has always been a major part of the city’s self-perception. The contemporary Oktoberfest as a playful homage to the German roots of Blumenau is just another indicator of this.