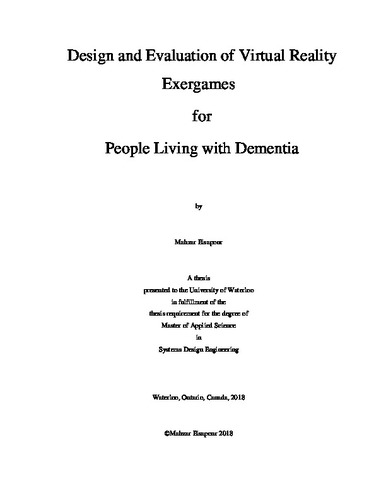 Dementias such as Alzheimer’s disease are a progressive neurodegenerative disorder with consequences such as cognitive impairment and memory problems. While exercise is important to improve physical health and quality of life for people living with dementia (PWD), symptom-induced challenges, such as language processing and physical limitations, can make it more difficult for PWD to engage in exercise. In this study, exercise games (exergames) to promote exercise for PWD were designed in two virtual environments: a farm and a gym. To design the activities and interfaces of the games, a participatory design approach was followed with exercise therapists, kinesiologists, and PWD from Schlegel Villages long-term care facility. Five upper-body motions were selected and five corresponding activities developed for each game. The games were built for the Oculus Rift CV1 head mounted display virtual reality (HMD-VR) as this platform uses a fully immersive three-dimensional display with high frame rate display. The touch controllers of Oculus were used to provide hand-motion interactions in virtual reality (VR). A three-week evaluation experiment was conducted with six PWD to evaluate the designed exercise games. A mixed-methods approach was used to qualitatively and quantitatively investigate the impact of using designed HMD-VR exergames in engaging PWD in exercise. Questionnaires for participants recorded participants’ feelings of enjoyment, engagement, interest, easiness, comfort, and level of effort. Clinical measurements of fitness parameters and recorded motion parameters from sensors in Oculus Rift provided quantifiable metrics such as range of motion (ROM), distance traversed, speed, grip strength, and shoulder circumduction for evaluation. All the participants successfully completed the exercise using the exergames, demonstrating the promising potential of using HMD-VR for PWD. The analysis of the participants’ answers to the questionnaires shows subjective metrics for human-guided exercise is comparable to VR games conditions, which is a noteworthy result considering the novelty of using VR for PWD. Overall, the analysis of motion parameters showed no differences between environments, which indicates the participants’ level of movment in VR environments was as good as with human-lead exercise. This thesis research demonstrates the potential of HMD-VR as an engaging way to support exercise of PWD.