Tensor Networks and the Renormalization Group 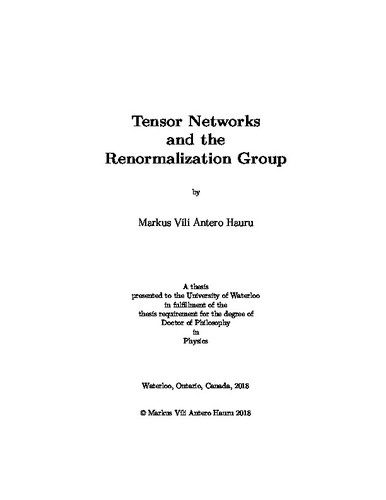 Tensor networks are a class of methods for studying many-body systems. They give a geometrical description of the internal structure of many-body states, operators, and partition functions, that can be used to implement efficient algorithms to simulate them numerically. In this thesis, after providing a very brief overview of the field, we present new tensor network methods for three different use cases. First, we present a new real-space renormalization group algorithm for tensor networks. Compared to existing methods, its advantages are its low computational cost, simplicity of implementation, and applicability to any network. We benchmark it on the 2D classical Ising model and find accuracy comparable with the best existing tensor network methods. Due to its simplicity and generalizability, we consider our algorithm to be an excellent candidate for implementation of real-space renormalization in higher dimensions, and discuss some of the details and the remaining challenges in 3D. Second, we show how certain topological conformal defects of critical lattice theories can be represented as tensor networks, using the 2D classical Ising model as an example. Furthermore, we show how such tensor network descriptions, combined with a renormalization group algorithm, can be used to obtain accurate estimates of the universal properties of these defects. We also show how coarse-graining of defects can be applied to any conformal defect (i.e. not just topological ones), and yields a set of associated scaling dimensions. Finally, we leave behind the focus on renormalization group methods, and present a method for spatially resolving the overlap between two tensor network states, to obtain localized information about the similarities and differences between them. For a given region, the similarity of two states in this region can be quantified by the Uhlmann fidelity of their reduced density matrices, and we show how such fidelities can be efficiently computed in many cases when the two states are represented as tensor networks. We demonstrate the usefulness of evaluating such subsystem fidelities with three example applications: studying local quenches, comparing critical and non-critical states, and quantifying convergence in tensor network simulations.