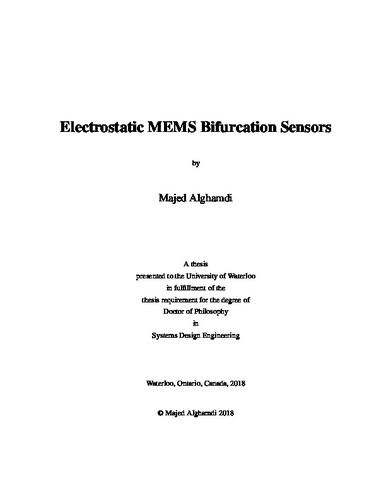 We report experimental evidence of a new instability in electrostatic sensors, dubbed quasi-static pull-in, in two types of micro-sensors operating in ambient air. We find that the underlying mechanism and features of this instability are distinct from those characterizing hitherto known static and dynamic pull-in instabilities. Specifically, the mechanism instigating quasi-static pull-in is a global Shilnikov homoclinic bifurcation where a slow-varying waveform drives the sensor periodically through a saddle-node bifurcation. Based on these findings, we propose a new taxonomy of pull-in instabilities in electrostatic sensors. Experimental evidence of nonlinear chaotic behaviors were observed in an electrostatic MEMS sensor. Period doubling bifurcation (P-2), period three (P-3), and period six (P-6) were observed. A new class of intermittency subsequent to homoclinic bifurcation in addition to the traditional intermittencies of type-I and type-II were demonstrated. Quasiperiodicity and homoclinic tangles leading to chaos were also reported. All of these nonlinear phenomena instigate either banded chaos or full chaos and both are observed in this work. Based on our knowledge, this is the first observation such chaotic behaviors in electrostatic MEMS sensors. All of the experimental observations have been measured optically via a laser Doppler-vibrometer (LDV) in ambient pressure. Also, a new class of intermittencies was found in the oscillations of an electrostatic sensor. These intermittencies involve a dynamic system spending irregular time intervals in the vicinity of the ghost of an orbit before undergoing bursts that are arrested by landing on a larger attractor. Re-injection into the vicinity of the ghost orbit is noise induced. As a control parameter is increased, switching intermittency of type-I leads to a stable periodic orbit, whereas switching intermittency of type-II leads to a chaotic attractor. These significant findings in nonlinear dynamic were used to develop novel MEMS sensors. An electrostatic MEMS gas sensor is demonstrated. It employs a dynamic-bifurcation detection technique. In contrast to traditional gas or chemical sensors that measure (quantify) the concentration of an analyte in analog mode, this class of sensors does not seek to quantify the concentration. Rather, it detects the analyte's concentration in binary mode, reporting ON-state (1) for concentrations above a preset threshold and OFF-state (0) for concentrations below the threshold. The sensing mechanism exploits the qualitative difference between the sensor state before and after the dynamic pull-in bifurcation. Experimental demonstration was carried out using a laser-Doppler vibrometer to measure the sensor response before and after detection. The sensor was able to detect ethanol vapor concentrations as 100\,ppb in dry nitrogen. A closed-form expression for the sensitivity of dynamic bifurcation sensors was derived. It captured the dependence of sensitivity on the sensor dimensions, material properties, and electrostatic field. An analog dynamic bifurcation mass sensor is developed to demonstrate a sensing mechanism that exploits a quantitative change in the sensor state before and after depositing added mass. A polymeric material was deposited on the top surface of the sensor plate to represent added mass. A variation in the frequency and current amplitude were utilized to demarcate the added mass optically and electrically. A chemical sensor was also developed to detect mercury in deionized-water in a fashion of analog detection. A polymeric sensing material that has high selectivity to mercury was utilized to captured mercury molecules in water. The sensor was submerged completely in water with a pre-defined flow-rate. The sensor was excited electrostatically. A variation in the frequency response due to added mass was measured electrically using a lock-in amplifier. A frequency-shift was observed while releasing the mercury to the water.