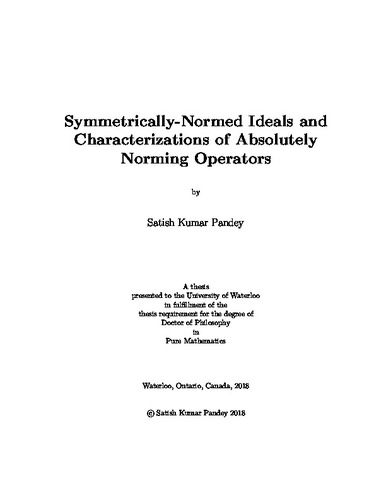 The primary objective of this thesis is two fold: first, it is devoted to the study of absolutely norming operators (with respect to various arbitrary symmetric norms on $\mathcal{B}(\mathcal{H})$) with an eye towards the objective of characterizing these classes of operators, and second, it summarizes the first three chapters of the monograph \emph{Introduction to the theory of linear nonselfadjoint operators} by Gohberg and Krein, offering an exposition of the theory of symmetrically-normed ideals (``norm ideals" in older literature) in modern terminologies. Governed by the intention of providing a fairly comprehensive treatment of this theory, independent of the rest of the thesis, we have distributed this ``exposition" part of the thesis over two chapters, namely Chapter 2 and Chapter 7. While Chapter 2 concerns the elementary theory of s-numbers and provides the necessary background for the chapters to follow, the goal of the seventh chapter is to discuss the theory of symmetrically-normed ideals of the algebra of operators on a Hilbert space, with most of the attention centered around symmetrically-normed ideals of the algebra of compact operators on a (separable infinite-dimensional) Hilbert space. These chapters are, for all practical purposes, entirely independent of the rest of the thesis; the readers interested in the basic theory of these ideals can go through these chapters and leave everything else. Chapter 3 is concerned with Chevreau's problem of characterizing the class of absolutely norming operators --- operators that attain their norm on every closed subspace. The result of this chapter settles Chevreau's problem by establishing a spectral characterization theorem for such operators. In Chapters 4 - 6, we first extend the concept of absolutely norming operators to several particular (symmetric) norms (that are equivalent to the operator norm) and then characterize these sets. In particular, we single out three (families of) norms on $\mathcal{B}(\mathcal{H}, \mathcal{K})$: the ``Ky Fan $k$-norm(s)", ``the weighted Ky Fan $\pi, k$-norm(s)", and the ``$(p,k)$-singular norm(s)", and thereafter define and characterize the set of ``absolutely norming" operators with respect to each of these three norms. In Chapter 8, we restrict our attention to the algebra $\mathcal{B}(\mathcal{H})$ of operators on a separable infinite-dimensional Hilbert space $\mathcal H$ and use the theory of symmetrically normed ideals to extend the concept of norming and absolutely norming from the usual operator norm to arbitrary symmetric norms on $\mathcal{B}(\mathcal{H})$. In addition, this chapter presents a constructive method to produce symmetric norm(s) on $\mathcal{B}(\mathcal{H})$ with respect to which the identity operator does not attain its norm. Finally, in Chapter 9, we introduce and study the notion of ``universally symmetric norming operators" and ``universally absolutely symmetric norming operators". These refer to the operators that are, respectively, norming and absolutely norming, with respect to every symmetric norm. The setting of this chapter is again a separable infinite-dimensional Hilbert space. This chapter characterizes such operators: the main result of this chapter states that an operator in $\mathcal{B}(\mathcal{H})$ is universally symmetric norming if and only if it is universally absolutely symmetric norming, which is true if and only if it is compact. In particular, this result provides an alternative characterization theorem for compact operators on a separable Hilbert space.