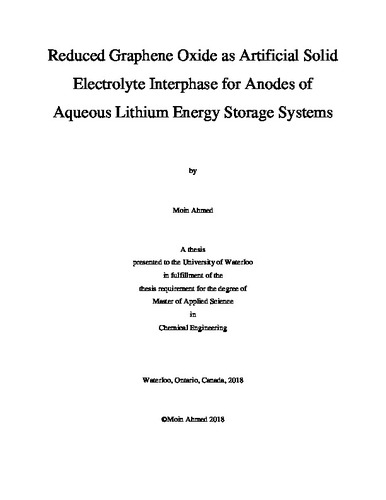 Rechargeable Aqueous Hybrid Battery (ReHAB) systems offer several advantages over the commercially available non-aqueous battery systems. The most noteworthy advantages include higher ionic conductivity, added safety, and more environmentally friendliness. However, the ReHAB exhibits faster capacity fading than their non-aqueous counterparts after repeated cycles of charge and discharge; this limits their wide-range commercial applications. Excessive corrosion of metallic anodes in the aqueous electrolyte and accelerated growth of dendrites during the charge/discharge processes are found to be the main reasons that severely impact the ReHAB’s lifespan. In this work, we implement ultra-thin graphene film as artificial solid electrolyte interphase (SEI) on the anode of ReHAB to mitigate detrimental anode oxidation and suppress dendritic growth during battery operation. First, we introduce the porous zinc anode into the ReHAB battery systems for the easier application of graphene coatings on the anode surface. Spectroscopy characterizations reveal that the porous anode has a significantly higher electrochemically active surface area than the commonly used planar zinc anode (a 15 μm by 15 μm area of porous anode have a surface area of 400 μm2 compared to 225 μm2 of the planar anode). Moreover, the porous anode displays higher wettability which makes it suitable for use in aqueous batteries. When compared to the batteries with the planar anode, batteries with the porous anode display a 32 % improvement in initial discharge capacity (136.28 mA h g-1 for porous anode vs. 103.42 mA h g-1 for planar anode) and higher cycling retention. Furthermore, batteries with the porous anode displayed a significantly higher discharge capacity at various C-rates ranging from 0.2C to 2C. Larger battery system (7 mA h) with the porous anode also shows an improvement in rate performance, which suggests the potential use of porous anode for large-scale commercial applications. Float charge and gas evolution tests suggest that there is less hydrogen evolution during cycling in batteries with the porous anode. Electrochemical characterizations reveal that the porous anode exhibits lower corrosion current density and significantly better dendritic suppression than the planar anode. Second, we introduce ultra-thin graphene films as artificial solid electrolyte interphase (SEI) on the surface of a porous zinc anode to improve the cycling stability of ReHAB system. The artificial SEI is fabricated at different thicknesses and areas ranging from ~ 1 – 100 nm and ~ 1 – 10 cm2, respectively, via a Langmuir-Blodgett trough method, and deposited onto the surface of the porous zinc anode. Electrochemical characterizations show a significant reduction in corrosion current density (0.033 mAcm-2 vs. 1.046 mAcm-2 for the control), suppression of dendritic growth (~ 50 %) and reduction in charge transfer resistance (222 Ω vs. 563 Ω for the control) when artificial SEI is utilized. The aqueous battery system with the artificial SEI (100 nm thickness) on the anode also shows ~ 17% improvement in cycling stability (82 % capacity retention after 300 cycles) compared to the control system. Comprehensive microscopy and spectroscopy characterizations reveal that the artificial SEI not only controls the ion transport between the electrolyte and the anode surface (lower corrosion) but also promotes a uniform deposition (less dendritic growth) of zinc on the anode.