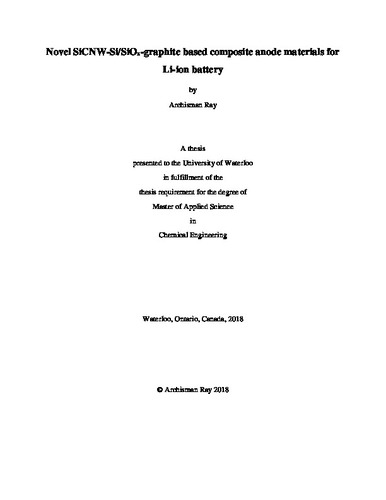 Over the past years, the extensive use of graphite as an anode material in a Li-ion battery (LIB) led to its commercialization and use as the standard anode material in a LIB. The use of graphite as an anode material in LIBs at present, remains a cause of concern primarily when used in large scale applications like in that of automotive and grid applications owing to its limited power density and specific capacity. This makes it a bottleneck and restricts its application as a potential anode candidate in the lucrative electric vehicle industry. From the material viewpoint, Si-based anode materials are an attractive candidate owing to their high energy-density of nearly 4200 mAh/g as compared to only 372 mAh/g for the graphite-based anode material. This work primarily concentrates on the fabrication, characterization and performance analysis of composite anode materials of SiCNW-Si/SiOₓ-graphite, with the aim of modifying the LIB to deliver a higher energy and power density with superior electrochemical performance coupled with good cycle performance, improved long-term stability and capacity retention without necessarily compromising with the cost and safety. This would therefore allow a potential scale up to the EV and HEV industry and for grid applications. The silicon carbide nanowires (SiCNWs) present in the composite apart from imparting strength, also increased the overall conductivity of the as-prepared composites, while effectively buffering the volume change of the Si/SiOₓ particles and preventing capacity fading by disintegration of active material by imparting strength to the composite electrode structure. Coal tar, which is an abundant by-product of the carbonization of coal possessing significant health and environmental hazards was effectively recycled and reused by incorporating it into the anode structure to form SiCNWs via a two-step growth mechanism. The use of the coal tar in LIB proves to be beneficial from both the economic and environmental view point. A simple, unique, cost-effective and scalable method to synthesize SiCNW-Si/SiOₓ-graphite composites using commercial SiOₓ, NFG (natural flaked graphite) powder and coal tar was investigated. By exploiting the advantages of the excellent long-term stability of graphite, high capacity of SiOₓ and the unique structure SiCNW, SiCNW-Si/SiOₓ-graphite composites with a unique architecture comprising of clustered micro-nano sized Si/SiOₓ particles and thread-like SiCNWs were synthesized. These particles were found to be homogeneously dispersed and encapsulated within the conductive graphite matrix. The synthesis process comprised of a mechanical milling process followed by thermal annealing at 1000℃ in an inert argon atmosphere. A typical composite electrode containing 25% SiOₓ,11 % coal tar and 60% graphite by weight, when used in a half cell against Li metal counter electrode exhibits excellent stability and a high reversible capacity of 760 mAh/g at 0.1 A/g post 500 cycles. In addition, it has an excellent reversible capacity retention of 87.6% with consistently high coulombic efficiency (99.75% after the fourth cycle and stable at ~99.87% for 500 cycles) and remarkable electrochemical performance. Even at higher rates ranging between 0.5-2 A/g, the composite electrodes exhibit good rate capability. This process opens a new window of incorporating a sufficiently small amount of SiOₓ and coal tar, relative to a higher amount of graphite, to produce highly-stable SiCNW-Si/SiOₓ-graphite composites. These composites can potentially replace graphite as the next generation anode material for LIB application.