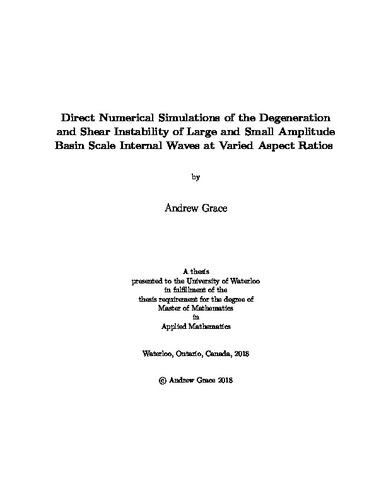 This thesis presents high resolution simulations of the degeneration and shear instability of standing waves, or seiches, of varying amplitudes and aspect ratios in a continuously stratified fluid. It is well known that such waves evolve to form non–linear, dispersive wave trains under certain conditions. When the initial amplitude scaled by the upper layer depth (the dimensionless amplitude) is sufficiently large, it is possible that stratified shear instability develops, possibly at the same time as the formation of wave trains early in the evolution of the flow. While both of these physical phenomena serve to move energy from large to small scales, they are fundamentally different. The development into wave trains is non-dissipative in nature, and in the asymptotic limit of small, but finite amplitude seiches may be described by variants of the Korteweg–de–Vries (KdV) equation. Shear instability, on the other hand yields Kelvin-Helmholtz billows which in turn provide one of the basic archetypes of transition to turbulence, with greatly increased rates of mixing and viscous dissipation. Discussed is how the two phenomena vary as the aspect ratio of the tank and the height of the interface between lighter and denser fluid are changed, finding examples of cases where the two phenomena co-exist. Beginning with an expository set of examples of small amplitude seiches, the process by which a seiche changes from a traditional standing wave to a more complicated small scale set of dynamics is discussed. The results demonstrate that when the initial dimensionless amplitude is small, the seiche takes more than one oscillation period for non–linear effects to become obviously present in the flow. The small amplitude results put into context the cases where the dimensionless amplitude becomes large enough such that non–linear process occur at much earlier times and there is a competition between the formation of wave trains and stratified shear instability. A quantitative accounting for the evolution of the horizontal modewise decomposition of the kinetic energy of the system is presented along with a semi-analytical model of the evolution of the fundamental mode of the seiche. Using two well known methodologies from the literature, the evolution of the mixing dynamics of the seiche is compared from an energetic perspective and a density variability perspective which illustrates a fundamental transition that occurs as the aspect ratio is decreased. Finally, the seiche degeneration and the mixing dynamics are summarized and the most likely future directions of study are highlighted.