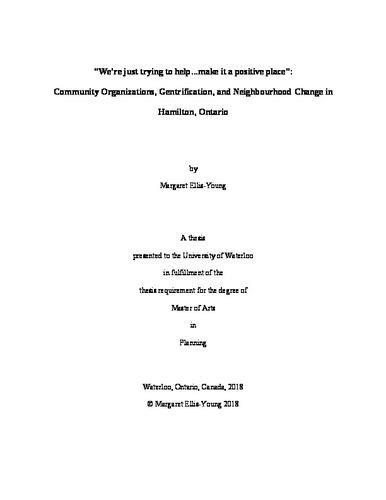 As a historic hub of steel manufacturing impacted by deindustrialization, Hamilton, Ontario has until very recently been positioned as a centre of decline. However, new narratives of revitalization have emerged alongside recent waves of investment and improvement projects focused on Hamilton’s urban core, introducing concerns of gentrification and displacement within the city’s central neighbourhoods. In this thesis, I explore community-based organizations (neighbourhood associations, community-focused business improvement associations, and certain city-wide organizations) as actors within this context of gentrification, an area that has received limited exploration within the literature. I examine how organizations’ initiatives shape and respond to the current trajectory of change within Hamilton’s inner city neighbourhoods, and the equity implications therein. I also consider how representatives of community organizations perceive change, as well as their roles and impacts, within the gentrifying neighbourhoods. My findings draw on 15 semi-structured interviews with representatives from 12 organizations engaged in neighbourhood-level activities and gentrification-related issues in central Hamilton, as well as document analysis. Representatives’ perceptions and their organizations’ impacts with respect to gentrification and neighbourhood change emerge as multi-faceted and occasionally contradictory. Actions often work in tension to simultaneously protect and potentially compromise the inclusivity of Hamilton’s inner city neighbourhoods, with instances in which gentrification and displacement are both resisted and facilitated. Despite consistently placing value on diversity and belonging, organizations identify a multiplicity of priorities and face limits to their capacity, which constrain their ability or sense of responsibility to respond to evidence of inequitable neighborhood change. These findings raise the question of who is ultimately responsible to address determinants and impacts of gentrification in Hamilton and other similar contexts, suggesting the need for policy and/or financial supports from multiple levels of government.