War, Factionalism, and Civil-Military Tension: The Madras Army and the Company State in the Carnatic, 1767-1777 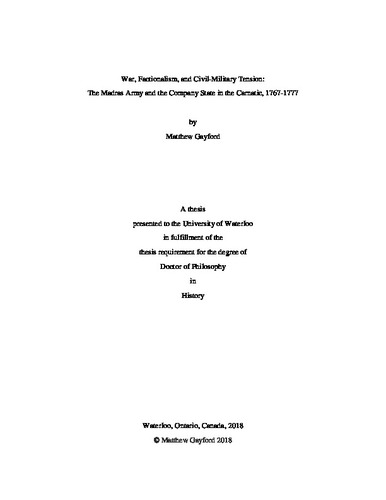 This study explores how the Madras Army and its officers helped to shape the East India Company’s developing state in the Carnatic during the late 1760s and 1770s, and in particular it draws attention to their critical role during a period of factionalism and flux. It focuses on the First Anglo-Mysore War (1767-1769), and highlights how the war’s conduct and outcome were decisively shaped by the tensions arising from ambiguities and personal agendas that marked civil-military relations. It then proceeds to analyze the 1776 coup at Madras, in which a faction of the governing Council ousted the Governor, George, Lord Pigot (1719-1777), by drawing on the support of key officers in the Madras Army, and then considers the coup’s aftermath. Both the war and the coup are excellent examples through which civil-military relations can be illuminated. This study is primarily grounded in archival research in the British Library and National Library of Scotland, and employs civil-military theory in its analysis. Civil-military relations were particularly challenging in India under the Company Raj, due in large part to the complicated nature of the EIC’s relationship with Parliament and the British Crown (including the British Army and the Royal Navy) as well at the inherent hybridity of the Anglo-Indian ‘Company State.’ Nevertheless, this uniqueness, combined with scholarly neglect of the Madras Army in general and the events of the 1760s and 1770s in the Carnatic in particular, make it an ideal subject for an exploration of civil-military relations, military institutions, and military culture. It is clear from the findings of this study that the military – and particularly the officer corps of the Madras Army – played a prominent role in the factional disputes in the Madras Presidency during the period in question. The military, however, was never as monolithic or as praetorian as some abstract theories might otherwise suggest, for officers, individually as well as collectively, often aligned themselves with civilian actors due to overlapping financial or political interests.