On [Re]building Downtown: Design Framework for the Core Area 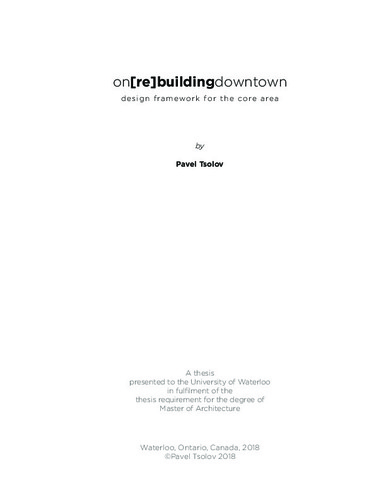 Rapid condominium development in Toronto is consuming large areas of the ground plane in prominent corridors of the downtown core. This is the most popular development practice for Mixed-Use land use in Toronto. It is designed to maximize land values, turning these areas into commodified spaces for retail and chain stores. While rapid condominium development effectively provides much needed housing, it only supports public space as a space of consumption. This produces a social conflict with the needs of the residents above. An increasing population density in combination with a decreasing public space results in a lack of dedicated amenities for active recreation as well as diminished outlets for citizen expression. On [Re]building Downtown is referring to On Building Downtown -- a report with design guidelines for the core area presented to the City of Toronto Planning Board in 1974. During this period, mayor David Crombie pushed to reform a rapidly developing Toronto towards a more socially responsible built environment. In a similar way, this thesis proposes a new design framework to improve the social life of urbanites by addressing the challenges of Toronto’s rapidly transforming public realm. This framework focuses on carving out designated spaces from condominium developments along high density corridors, framing the communication between buildings, and facilitating public engagement at multiple scales: the Core, the Street, the Room, and the Object. The resulting design introduces a new form of ground plane that considers activity and identity while giving purpose to public space by responding to surrounding density.