Coffee Houses and Arcades: A Forensic Inquiry into the Myths of Modernity 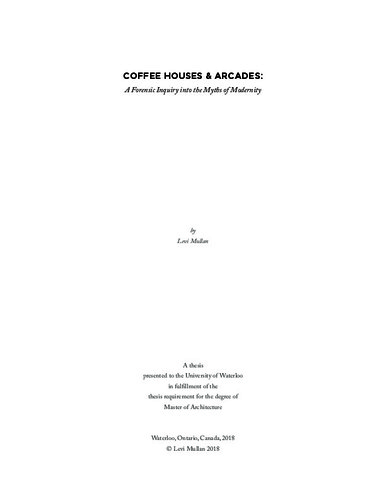 Two founding myths of modernity, British coffee houses and Parisian arcades, have both been described as stages for the public display of private persons. The former was a “micro-stage where visitors could enact their chosen personalities”[1] and the latter, a promenade for the bourgeoisie to “display itself to the world.”[2] Central to these two spaces of appearance are two objects of inquiry: fashion and architecture. By forensically reconstructing these objects, the myths are put to the test. In the first, the egalitarian ideal claimed by the coffee house is pitted against reality, where architecture and fashion conspire to produce new lines of exclusion. In the second, the aesthetic character of the Arcade as phantasmagoria is dissected, and again architecture and fashion are charged as conspirators in producing the politically debilitating dream state. Coffee house interiors dissolved social hierarchies, leaving space for fashion to emerge as a primary vehicle of power. A study of 17th C. British interiors crossed with a forensic reconstruction of coincident fashions reveals the transfer of power from space to fashion. This transfer of power led to fashion-based forms of exclusion. Literal lines of exclusion are identified in the silhouette of a cuff or an overcoat. It is in these “trivial” sartorial nuances that power embedded itself. Arcade architecture and its coincident fashions both framed modernity in the images of earlier epochs. Arcades cited early eastern and classical architecture, while coincident fashions cited the Elizabethan age. At the same time, a number of technological innovations were emerging in architecture and fashion. These include gas lighting, iron construction, mechanical looms, and new sartorial forms. This coupling, of citation and innovation, past and future, represents the principal aesthetic quality of the phantasmagoria. The phantasmagoria created a false sense of progress and consequentially hindered concerted political action. A forensic reconstruction of arcade architecture and fashion unearths the material properties of these time-transcendent citations, premature innovations, and the phantasmagoria produced by their coupling. While centering on the problematic, this thesis recognizes these relationships are dialectical and exist as problem and potential. In the coffee house, potential laid in the new opportunity to make oneself uniquely visible in the public realm. In the arcades, the potential laid in their ability to reveal the inefficacies of the capitalist system, and paradoxically, provided the necessary shock to spark concerted political action. [1] Christoph Grafe, Cafés and Bars: The Architecture of Public Display (New York: Routledge, 2007), 28. [2] Johann Friedrich Geist, Arcades, The History of a Building Type, (Cambridge: MIT Press, 1983), 114.