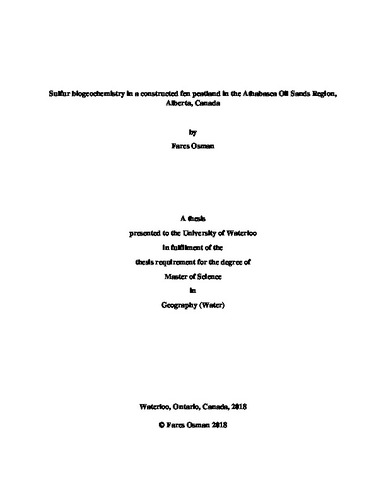 In peatlands, increased sulfate (SO42-) availability can stimulate dissimilatory SO42- reduction (DSR), allowing it to become a prominent anaerobic carbon (C) mineralization process. In turn, methane emissions may be suppressed, but at the expense of potentially degrading peat accumulation processes if DSR dominates C mineralization pathways. Additionally, as a product of DSR, sulfide sequesters potentially toxic metals as insoluble precipitates. However, accumulation of dissolved sulfide may be toxic to wetland vegetation species. Peatlands are abundant in the Western Boreal Plain in Alberta, the majority of which are fens. Due to the nature of surface mining in the Athabasca Oil Sands Region (AOSR), these systems are removed from the landscape. Accordingly, oil sands companies are required to return their post-mined sites to equivalent pre-disturbed conditions. In an attempt to test the feasibility of fen creation in the AOSR, a fen peatland ecosystem, named Nikanotee Fen, has been constructed with water supply from an adjacent tailings sand upland aquifer and surrounding reclaimed hillslopes. In the fen peat deposit, pore water SO42- concentrations are 1 to 2 orders of magnitude higher than in surrounding natural peatlands. Due to the nature of the materials used in the design of the system, and the management practices employed prior to construction, the sources that contribute to the elevated pool of SO42- are not well understood. The purpose of this research was to investigate the main sources of SO42- and identify hydrogeochemical controls on its dissolved pool in the pore waters of Nikanotee Fen. Throughout the study period (2013-2016), pore water SO42- concentrations were generally highest in the upland tailings sand aquifer, primarily derived from legacy gypsum (CaSO4·2H2O) in process affected water, in addition to the marine origin of the sand which was reflected by Ca:SO4 molar ratios less than 1 in the groundwater, especially in the eastern region. In the petroleum coke underdrain that was incorporated to control groundwater transport from the upland aquifer, pore water SO42- concentrations increased over time. Dilution, due to freshwater inputs from precipitation and surface runoff generated by the reclaimed hillslopes, was the main mechanism controlling the dissolved SO42- pool in the upland aquifer and petroleum coke underdrain. Additionally, the heterogeneity of the placed tailings sand likely contributed to the variability in pore water SO42- distribution between the eastern and western regions of the upland. Unexpectedly, the peat deposit in 2013 initially experienced substantially higher pore water SO42- concentrations than the underlying petroleum coke underdrain in the western region of the fen, indicating a pre-existing source of SO42- in the peat, possibly due to the prolonged drainage of the donor fen. However, lower average pore water SO42- concentrations than in the underlying petroleum coke underdrain, Ca:SO4 molar ratios exceeding 1, and elevated HCO3- concentrations in the eastern and western regions of the fen peat deposit indicated that SO42- reduction was likely occurring in the layer at the end of the 2013 season and in the subsequent years. To test the former hypothesis that the donor peat management practices may have led to elevated SO42- concentrations in the peat deposit during the first year, a batch incubation experiment was conducted in which peat was treated with aeration (oxic conditions) and inundation (anoxic conditions) at 15 and 25°C, after a drying period of 7 days. Sulfate release was immediately evident 24 hours following re-wetting. At both incubation temperatures, further increases in S-SO42- concentrations were observed upon aerobic incubation of the dried and re-wet peat. Drying, instead of temperature sensitivity, was the primary mechanism controlling S-SO42- release due to oxidation of reduced inorganic sulfur (S) as well as enhanced mineralization of organic S. Following inundation of the formerly oxidized peat, a sharp decrease in S-SO42- concentration was seen at both temperature incubations, most likely due to SO42- reduction. Further decreases in S-SO42- concentration were not pronounced at the end of the inundation period, possibly due to limitation by labile C since SO42- apparently was not limiting for sulfate reducing bacteria. This research provides insight into the sources of SO42- and processes that control its dissolved pool in Nikanotee Fen. Additionally, the findings can be used to establish a general baseline for future reclamation projects that may mimic the design strategies of Nikanotee Fen. Based on the results, it is recommended that the time frame between drainage and extraction of donor peat is reduced as much as possible in the design of future fen systems in the AOSR.