"For the Freedom of the Black People": Case Studies on the Universal Negro Improvement Association in Canada, 1900-1950 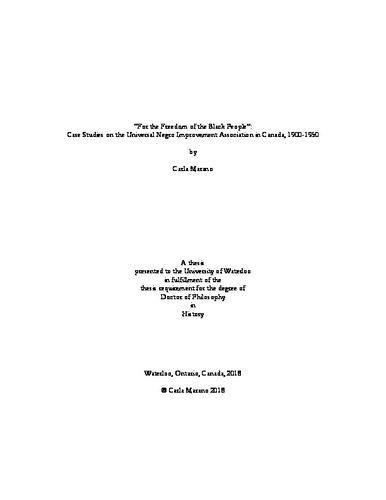 Using a case study approach, this dissertation examines the history of the Universal Negro Improvement Association (UNIA) in Canada in the early twentieth century. The UNIA, a secular organization intended to unite people of African descent across the globe, has not been studied in-depth in a Canadian context. This dissertation aims to fill some gaps in the scholarship. By examining various divisions of the UNIA in four Canadian regions (Montreal, Toronto, Cape Breton Island, and Edmonton), “For the Freedom of the Black People” argues that the UNIA served as an important catalyst to the establishment of black communities in Canada. At the local level, the UNIA acted as a community-building tool for black newcomers to Canada from the Caribbean and the United States. Uniquely, the case studies show that the UNIA in Canada maintained close ties to local black churches in order to bolster this growing sense of community. Moreover, the case studies also explain the ways in which local UNIA divisions adapted to meet the unique needs of each black community. In fact, the UNIA evolved to suit a changing demographic as immigration patterns and community goals shifted, and sometimes facilitated the launch of more specific organizations designed to remedy particular social and economic issues. This dissertation also argues that UNIA members in Canada played a critical role in the growth of the organization internationally, and in its survival after the death of its founder, Marcus Garvey. Beyond the local, Canadian Garveyites (i.e., followers of the UNIA) forged a Pan-African consciousness as members of a transnational confraternity that celebrated African heritage and pushed for racial equality. This Pan-African awareness inspired them to actively participate in the UNIA’s international programmes, like the Black Star Line, The Negro World newspaper, and the School of African Philosophy. In this way, Canadian Garveyites added their voice to the global fight against racial discrimination, thereby affirming their place within the African Diaspora.