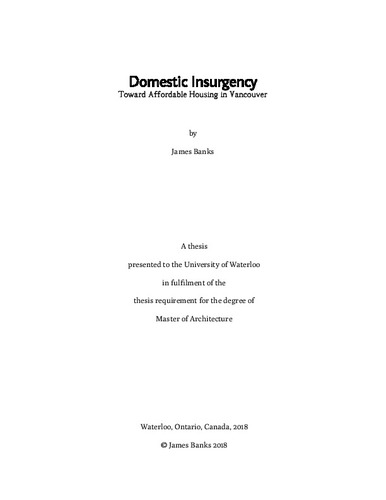 Vancouver’s persisting housing crisis has decoupled dwelling prices from local income through persistent capital investment oriented dwelling typologies and restrictions on land availability. Vancouver, as one of the first North American cities to reach a post-sprawl condition, must correct policy and land use to acknowledge changes in dwelling preferences, demographics, and land value to provide a new mass housing strategy. Once contradictory policy is aligned to affordable housing values, the thesis proposes a housing framework for the private sector to profitably build dwellings suitable for a range of local incomes. The framework targets Vancouver’s most prominent, repetitive, and artificially underused land, its low density house neighbourhoods, to resurrect a middle density housing typology to respectfully transition neighbourhoods to affordable dwellings. Using a three pronged approach of neighbourhood improvement, flexible design for occupant control, and a focus on sharing, dwellings are drastically reduced in cost due to efficient space and material planning while simultaneously increasing living benefits to building inhabitants and its existing neighbours. Traditional thresholds at the dwelling and building scales are reimagined to support smaller living spaces and urban development in established neighbourhoods that create new co-dependent beneficial relationships and dynamically mitigate frictions, rather than eliminate them altogether. Ultimately, the framework provokes a wave of disruption in the housing market in response to current crisis conditions by making living more communal, shifting the focus from investment to human capital and by reinstating affordability as a key facet in the living standard formula governing housing design. The framework is an insurgent force that provides affordable housing through the private sector despite distorted high property costs, using existing property and economic mechanisms to create an alternative competitive affordable housing type. It is also an insurgency within the built fabric of the city, inserting itself within established neighbourhoods currently fortified against change and in progressing ideas of co-living and participatory design. Overtime, efforts to improve neighbourhoods for existing residents, putting people first, and creating a sustainable growth strategy capable of housing new residents for the long term, it is the ambition of this proposal to eventually reach a critical mass to reduce housing prices for all dwellings to restore affordability within the entire city.