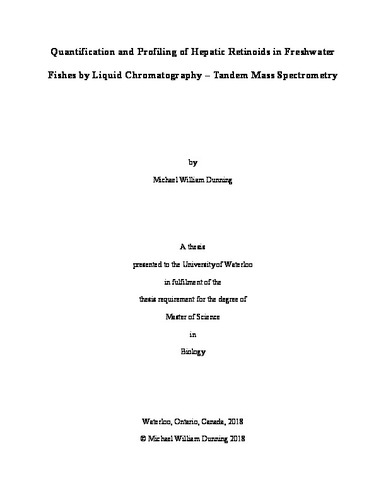 Retinoids (vitamin A1) are a class of compounds essential for a number of physiological processes including vision and immune system function. They are stored as biologically inactive retinyl esters which are mobilized and converted to the transcriptionally-active retinoic acids (RAs) according to physiological and nutritional requirements. RAs are key components in gene expression and are required for proper embryonic development in vertebrates. In addition to retinoids, dehydroretinoids (vitamin A2) appear to be of high importance in some species of freshwater fish. In some cases dehydroretinoids are found to be more abundant than retinoids, which has led to classification of fish species as “retinol-type” or “dehydroretinol-type” based on the major class of retinoids utilized. The exact functions, metabolism, and distribution of dehydroretinoids in fish remain to be elucidated and requires further investigation into how the retinoid and dehydroretinoid systems interact in aquatic species. Disruptions to the retinoid system have been observed in several species of fish by exposure to xenobiotics and contaminants from various sources including mine tailings and pulp mill effluent. These assessments typically only consider retinyl esters and/or free retinol, however a need has been recognized in the literature for retinoid analysis to establish what linkages exist between depressed levels of retinol/retinyl esters caused by pollutant exposure and how this may impact levels of biologically active vitamin A. Retinol and retinyl esters are most often analyzed by ultraviolet spectrophotometry. While these methods provide acceptable detection limits for quantification, they lack specificity and require authentic standards which can be expensive or impossible to obtain. Retinoic acids are thought to be present in fish at the pmol/g level and due to analytical limitations have not been adequately quantified to date. The objective of this thesis was to develop a comprehensive and robust method to measure retinoids and dehydroretinoids in fish, thereby facilitating further research into retinoid biology. A streamlined extraction method was applied to generate separate fractions of non-polar retinoids (retinol/retinyl esters) and active retinoids (retinoic acids) from as low as 5 mg of hepatic tissue. A new approach coupling liquid chromatographic separations to mass selective detection was developed that enabled the quantification of major retinoids by triple quadrupole mass spectrometry. The analysis was validated with standards and found to provide acceptable sensitivity, accuracy, precision, and linearity. The limit of quantification was in the range of 0.12 – 1.10 ng/mL for retinoic acids, 1.04 ng/mL for retinol, and 0.82 ng/mL for retinyl palmitate. This new method was then applied to select archived fish tissues of brown bullhead (Ameiurus nebulosus) and shorthead redhorse sucker (Moxostoma macrolepidotum) from two North American Great Lakes Areas of Concern (AOCs) to demonstrate the ability of the method to detect differences in hepatic retinoid status in populations of fish exposed to different environmental stressors. The method was capable of detecting significant decreases in free retinol and retinyl esters in shorthead redhorse sucker from a contaminated site. Retinoic acid status could not be adequately assessed in hepatic tissue due to significant matrix interferences resulting in failure to meet QA/QC criteria. The application of high resolution quadrupole time- of-flight instrumentation also allowed tentative identification of retinoids for which standards are not commercially available, and semi-quantitative profiling of vitamin A1 /vitamin A2 distribution in hepatic tissue. Profiling of liver samples from shorthead redhorse sucker showed near equal levels of retinyl and dehydroretinyl esters, while dehydroretinoids appeared to be dominant over retinoids in brown bullhead. These investigations advanced the field of retinoid biology by allowing for a greater range of compounds which can be confidently analyzed without the need for expensive or unavailable standards, and by providing the ability to semi-qualitatively assess retinoid/dehydroretinoid abundances in different fish species. Resolving the persistent matrix issues which complicates the analysis of retinoic acids in hepatic tissue should be the focus of future work. Once resolved, this method may be used to begin answering some of the open questions regarding retinoid metabolism and functions in fish.