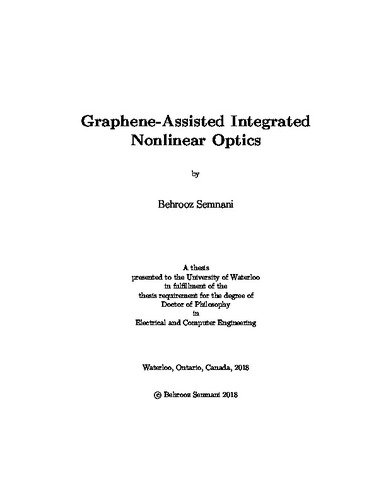 ‎The unique linear and massless band structure of graphene in a purely two-dimensional Dirac fermionic structure has ignited intense research since the first monolayer graphene was isolated in the laboratory‎. ‎Not only does it offer new inroads into low-dimensional physics; graphene exhibits several peculiar properties that promise to widen the realm of opportunities for integrated optics and photonics‎. ‎This thesis is an attempt to shed light on the exceptional nonlinear optical properties of graphene and their potential applications in integrated photonics‎. ‎Following a theoretical exploration of light-graphene interaction‎, ‎disruptive new insight into the nonlinear optics of graphene was generated‎. ‎It now appears that graphene can efficiently enable photon-photon interaction in a fully integrated fashion‎. ‎This property‎, ‎taken together with ultrawideband tunability and ultrafast carrier dynamics could be fully exploited within integrated photonics for a variety of applications including harmonic generation and all-optical signal processing‎. ‎The multidisciplinary work described herein combines theoretical modeling and experimentation to proceed one step further toward this goal‎. ‎This thesis begins by presenting a semiclassical theory of light-graphene interaction‎. ‎The emphasis is placed on the nonlinear optical response of graphene from the standpoint of its underlying chiral symmetry‎. ‎The peculiar energy‎- ‎momentum dispersion of the quasiparticles in graphene entails a diverging field-induced interband coupling‎. ‎Following a many-body study of the carrier relaxations dynamics in graphene‎, ‎it will be shown that the charged carriers in the vicinity of the Dirac point undergo an unconventional saturation effect that can be induced by an arbitrarily weak electromagnetic field‎. ‎The perturbative treatment of the optical response of graphene is revisited and a theoretical model is developed to estimate the nonlinear optical coefficients including the Kerr coefficient of graphene‎. ‎The theoretical models are complimented by the experimental results‎. ‎The peculiar nonlinear optical properties of graphene together with its ablity to being integrated with optical platforms would render it possible to perform nonlinear optics in graphene integrated nanophotonic structures‎. ‎Here‎, ‎the suitability of graphene for nonlinear optical applications is investigated both theoretically and experimentally‎. ‎The emphasis is placed on an on-chip platform for ultrafast all-optical amplitude modulation‎. ‎The experimental results indicate strong all-optical modulation in a graphene-cladded planar photonic crystal nanocavity‎. ‎This development relies heavily on the unique properties of graphene‎, ‎including its fast carrier dynamics and the special phonon induced relaxation mechanism‎. ‎Finally‎, ‎the potential application of graphene based all-optical modulation in time resolved nonlinear spectroscopy is also discussed‎.