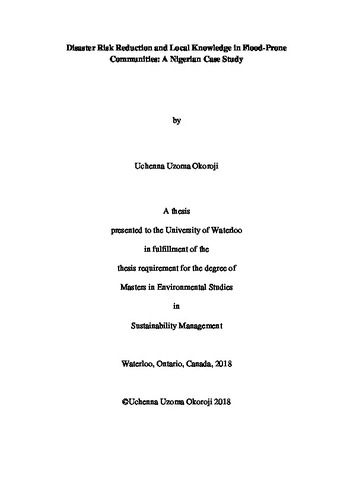 There has been a long debate regarding the value of traditional/indigenous/local knowledge in disaster risk reduction. Often viewed as ‘backwards’, governments instead have emphasised ‘advanced’ technologically sophisticated and economically expensive approaches to DRRM (generally equated with ‘Western science’). Increasingly, however, it is recognised that local participation and ways of knowing are essential for long-term DRRM. This is formally articulated in numerous inter-governmental and governmental documents. Despite this recognition, the gap between saying and doing remains wide. There continues to be an over-reliance on techno/economic approaches to DRRM led by state actors, while local people and contexts are broadly ignored. In many cases, DRR plans are little more than empty proclamations. When disaster strikes, people are left to fend for themselves; where the government is involved, it is generally in a reactive, crisis-management way. In this thesis, the author examines the case of Nigeria. He describes the Nigerian setting. He analyses the formal government position on DRRM, in particular reflecting on the ways that government foresees local participation and contributions to DRRM. He then looks at three case studies of disaster events in three different states of Nigeria. Each community was hard hit by flooding in 2012. They were again hard hit by flooding in 2017. The author reflects on the event and the outcome of each occurrence in each case: what was the preparedness setting? What were the effects on the community? How did the community react? How did these actions align with government DRRM policy, programming and action? It is hypothesised that, in the context of evolving global attention to DRRM mainly through the Hyogo and Sendai frameworks, one would anticipate different events and outcomes in the study areas. Put differently, five years after the 2012 flood events, the effects of the 2017 flood should have been better prepared for, so leading to less intense negative local level side effects. The author reveals that the 2017 flood event was similar in effect to the 2012 event. Indeed, interestingly people failed to heed early warnings from authorities regarding impending flood and recommended action. While it is beyond the scope of this thesis to analyse why this is so, one can reflect on the actions taken by local people in each case and examine them for the potential to build bridges with state authorities, so drawing local action and understanding into alignment with government claims regarding DRRM. Key Words: Social Resilience, Local Knowledge, Climate Change, Coastal Communities, Flood Management.