Predicting the potential health and economic impact of a sugary drink tax in Canada: a modelling study 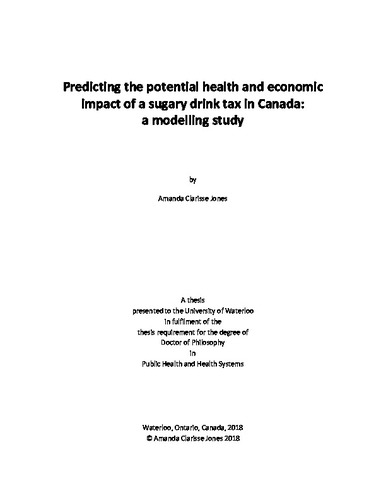 BACKGROUND Consistent with global trends, high body mass index (BMI) and high blood glucose have risen at rapid rates among Canadians. The consumption of sugar-sweetened beverages (SSBs) is a well-established and important dietary risk factor for these conditions. A growing body of research suggests that SSB taxes can achieve meaningful health impacts by shifting dietary preferences. However, there are several key literature gaps, including no estimations of the potential benefit of taxing ‘sugary drinks’, a beverage category that includes both SSBs and 100% juice, which is high in sugar. In addition, no published studies have simulated a tax on SSBs or sugary drinks for the Canadian population. PURPOSE The proposed study’s objectives were: 1) to investigate Canadians’ consumption of sugary drink types, and differences by socio-economic characteristics; and 2) to estimate the potential impact among the Canadian population of a simulated national tax on SSBs and a simulated tax on sugary drinks. METHODS The study was conducted in two components. First, sugary drink intake (volume and energy) was estimated using 24-hour dietary recall data from the 2015 Canadian Community Health Survey – Nutrition (respondents ages >1 year; final sample N=20,176). For 100% juice and ‘total SSBs’ (which included 15 beverage types), intake was reported overall and by socio-economic measures: sex, age, ethnicity, income, province, and BMI category. Student’s t-test and Wald F-test tested for differences among population sub-groups. SSB and sugary drink intakes were also estimated for inclusion in the study’s second component: a simulation of a sugary drink tax. The impact of the tax intervention was estimated using a proportional multi-state life table-based Markov model adapted to simulate the 2015 Canadian adult population. The model applied 10%, 20%, and 30% ad valorem taxes on SSBs and sugary drinks, and compared two populations: one with a tax intervention and one without a tax intervention. The model simulated the effect of energy intake from beverages on 19 diseases mediated by body mass, and the direct effects of intake on type 2 diabetes, accounting for beverage substitution. Sensitivity analyses examined key assumptions and Monte Carlo simulation assessed uncertainty. RESULTS A large proportion of respondents reported consuming 100% juice (children, 39.3%; adults 22.8%) or some type of SSB (children, 53.0%; adults, 40.8%) during the previous 24-hour period. In 2015, each Canadian consumed an average of 74.3 ml (33.7 kcal) of 100% juice and 203.6 ml (98.7 kcal) of SSBs per day. 100% juice was consumed more than any other sugary drink, followed closely by regular carbonated soft drinks. Compared to females, males’ consumption was significantly higher for 100% juice (37% greater volume) and total SSBs (54% greater). Children consumed more sugary drinks on average each day than adults: nearly double the volume of 100% juice (86% more) and 14% more SSBs. Beverage intake differed by ethnicity, province, and BMI category, but not by income quintile. For the simulated taxes, there were sizeable differences in the impacts of a SSB tax versus sugary drinks tax: prevalence of overweight/obesity changed from 63.3% to 61.7% vs 61.0%; type 2 diabetes incidence rate decreased by -5.9% vs -7.4%. Over a 25-year period, compared to a SSB tax, a sugary drinks tax produced 47% more averted disability-adjusted life years (DALYs; 314,326 versus 460,812), 45% greater health care costs savings ($7.5 billion vs $10.9 billion Canadian dollars), and 37% more annual tax revenue ($1.0 billion CAD vs $1.4 billion CAD). CONCLUSIONS Consumption of sugary drinks remains an important disease risk factor among the Canadian population. Average intake of sugary drinks in 2015 is lower than 2004 estimates, but remains high, especially among children and youth. The current study suggests that a beverage tax in Canada has the potential to substantially reduce the health burden while generating health care savings and tax revenue, especially if 100% juice is among taxed beverages. Given Canadians’ high 100% juice consumption, the mounting evidence on adverse effects associated with free sugar consumption, and the role of 100% juice as a substitute beverage to SSBs, there is a strong rationale for its inclusion as a taxed beverage. Future studies could examine the potential impact of a ‘tiered’ tax based on beverage sugar content, as well as the effects of a tax relative to other nutrition interventions.