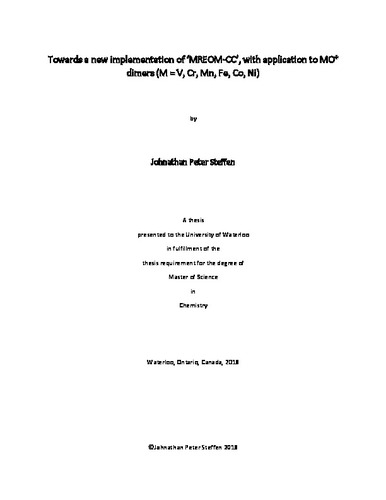 Multi Reference Equation of Motion Coupled Cluster (MREOM-CC) is an electronic structure method that allows the calculation of many electronic states simultaneously. A sequence of transformations are applied to a Hamiltonian allowing for a subsequent diagonalization of a much smaller subspace. These transformations preserve the eigenvalues of the original Hamiltonian, and paradoxically calculations increase in accuracy while simultaneously reducing the cost of the calculation. MREOM has previously been used to calculate transition metal atom spectra as well as vertical excitation spectra from organic molecules and transition metal complexes. In this thesis, MREOM is used to calculate a potential energy surface for several systems containing many excited states. The systems studied in this thesis are positively charged diatomic transition metal oxides (MO+, M = V, Cr, Mn, Fe, Co, Ni) chosen for both their electronic complexity as well as the opportunity for a tandem experimental study in the Hopkins lab. Calculations were approached using either a high spin or low spin regime for the reference states of each system. High spin systems converged at high interatomic distance but generally exhibited discontinuities. Low spin systems appeared smooth but were troublesome to set up. However, MREOM is not recommended for complicated potential energy surfaces until further improvements can be made. In a second project an improved algorithm is developed for the time-consuming final diagonalization step in MREOM. Using a carefully designed data structure for multiple electronic states the critical multiplication of “𝑔 ∙ 𝑐” is carried out efficiently, with minimal resorting and efficient BLAS matrix-matrix multiplication steps. The implementation is not yet complete, and requires interfacing with the rest of the code.