The Public Space of LRT Boulevards: The Waterloo Region ION Corridor as an Urban Place 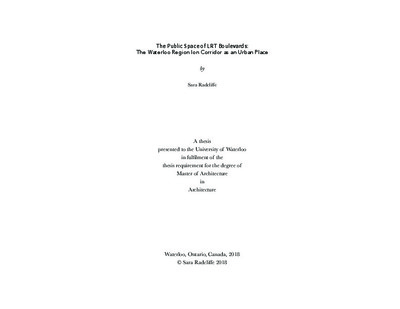 In 2018, the ION transit corridor will begin the process of linking the Tricities – Waterloo, Kitchener and Cambridge – into a linear metropolitan area, which will offer many economic and infrastructural development opportunities for Waterloo Region. This rebirth of local, high-capacity rail transit will offset the present reliance on private vehicular traffic and relieve perpetually overloaded buses. If suitably developed, there is potential for the creation of a new urban identity as a bicycle, transit, and, human-friendly regional metropolis. In the last decade, Waterloo Region has undergone tremendous transformation, with the commencement of new construction on a daily basis. The Region is often referred to as the Silicon Valley of The North, known as a young and prosperous area, boasting prestigious post-secondary institutions, which have created a symbiotic network of expanding cooperative education and startup culture. High-rise infill towers are being erected to replace low density development in an effort to house the student and startup populations in their respective urban districts. Many of these developments are creating a problematic effect on the overall urban perception, with tall building facades directly bordering sidewalks, and little attention paid to a desirable urban mixed-use functionality or human-scaled streetscape. An influx of population with lack of public amenities and streetscape is creating partially and badly urbanized zones, many of which make up the future trajectory of the ION. This current lack of local urban identity can be traced back to an absence of clearly mandated urban design and planning objectives by municipal government. With focus already on the possibilities of the ION system in developing the more central urban areas surrounding the Victoria Transit Hub in Downtown Kitchener, and the recently revitalized Uptown Waterloo, much consideration still needs to be given to the urban linkage between the two city centres, known as Midtown, in combination with a unified urban design framework for the Waterloo Region Transit Corridor. The single ION stop in Midtown is located at a key urban attractor, the Grand River Hospital, but it is surrounded by a low-density residential zone, massive parking lots, and underused commercial land. This approximately three-kilometer section of the Corridor is the prime area of research and design for this thesis--to connect the two downtown cores and create a cohesive, dense urban environment for future prosperous development. This thesis examines Waterloo Regions future LRT development as a means to urbanize and link the Downtowns of Waterloo and Kitchener through a linear green corridor, with the goal of adapting this model of curb-in urban intensification design to areas along the corridor, as they spread away from the main urban growth centres.