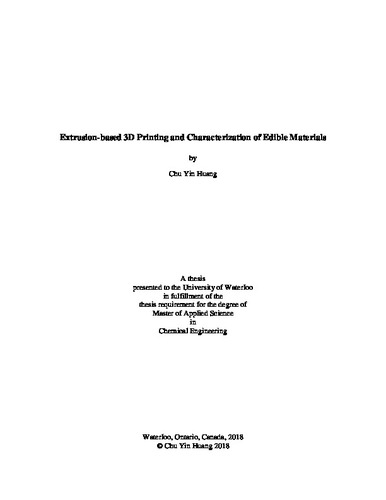 3D printing food offers the ability to customize shapes, texture, as well as nutritional content. In addition, it can automate the cooking process to save time and produce meals on-demand to minimize waste. One potential application is to 3D print food for those suffering from dysphagia, a condition that affects one’s ability to swallow. Texture modified food products for dysphagia often lose their shape and have limited visual appeal. 3D printing could provide shape to these texture modified food products and ultimately improve nutrient intake. One of the limitations that are currently preventing wider adaption of this technology is the lack of understanding of how food properties affect the 3D printing process and quality of the printed object. In this thesis, room temperature extrusion-based 3D printing was investigated using a desktop 3D printer with a syringe extrusion system. Two hydrocolloids, modified starch and xanthan gum, were used as model material to study room temperature extrusion-based 3D printing. The relationship between the 3D printer settings and the extrusion process variables, extrusion rate and nozzle speed, was obtained by investigating the machine command (G-code). The nozzle speed could be controlled by the extrusion multiplier while the extrusion rate could be controlled by the stepper motor speed. In addition, extrusion tests showed that the syringe extrusion system displayed a lag time around 2 to 5 minutes before stable extrusion rate was reached. The extrusion lag time increased with increased material yield stresses and decreased with increased syringe motor speed. Xanthan gum paste, modified starch pastes, and puréed carrot were selected as model inks. Oscillatory rheology measurements including strain and frequency sweep were conducted to study the range of properties suitable for 3D printing. The range of yield stress suitable for extrusion was between 60-730 Pa and around 0.1-0.2 for the loss tangent (tan δ). The printable range of complex modulus (G*) was from 320 to 1200 Pa. Furthermore, data from the frequency sweep of xanthan gum and modified starch pastes was fitted to power law models and compared to published data of foods to assess their potential suitability as food inks for 3D printing. Puréed carrot had higher G* compared to xanthan gum and modified starch pastes but had lower elasticity. Puréed carrot was suitable for 3D printing because of its stiffness and low elasticity. In addition, food texture measurements based on the methods described in the International Dysphagia Diet Standardisation Initiative (IDDSI) were also conducted. Printable inks were able to retain its shape on a fork without dripping through the prongs and slide off a spoon with minimal residue. Two printed objects were considered, a line and a cylinder. The line printing was conducted to find the optimal settings of volumetric extrusion rate, nozzle speed, and layer height. The cylinder printing was conducted to assess the effects of ink rheology and infill levels, the fraction of the interior of the object to be filled with material when printed, on maximum build height. Continuous lines and sharp angles were able to be 3D printed when the line diameter was 130% of the nozzle diameter. Slightly thicker lines ensure proper layer adhesion. The layer height of the printed line, determined from the aspect ratio (height over width), ranged from 50% to 80% of the nozzle diameter. Lower aspect ratio indicated spreading of the ink. The cylinder printing experiments indicated that an ink with storage modulus (G’) around 300 Pa produced cylinder up to 20 mm height before collapse, while an ink with G’ around 900 Pa produced a cylinder up to twice the height. Increasing infill levels from 0 to 50% provided additional internal support to the structure but subjected the object to more stress due to nozzle movement. The work presented in this thesis generated information on how rheological characteristics affect the food’s suitability for room temperature extrusion-based 3D printing as well as the quality of the printed object. The relationships between the 3D printer, slicer setting, and G-code were investigated to understand how extrusion rates and nozzle speeds can be controlled for 3D printing paste type inks. Food texture measurements based on the methods described in the International Dysphagia Diet Standardisation Initiative (IDDSI) were conducted with fork and spoon to assess the ink’s consistency and adhesiveness. Rheological characterization of the inks provided upper and lower limit of a printable ink. Power law models were used to analyze the rheology data and the models parameters of the inks were compared to published data of foods to assess their potential suitability as food inks for 3D printing.