Forward Dynamic Simulation of a Golf Drive: Optimization of Golfer Biomechanics and Equipment 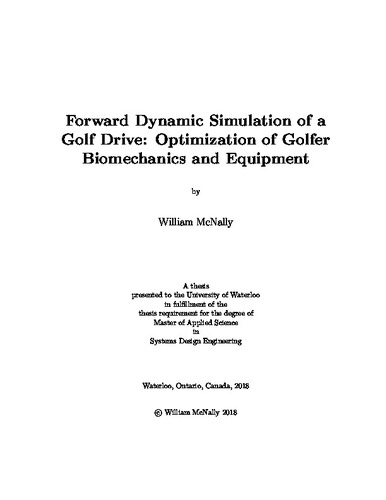 Advances in golf club performance are typically based on the notion that golfer biomechanics do not change when modifications to the golf club are made. A full-swing forward dynamic golf drive model, including impact and ball flight, has been developed to provide a deeper understanding of the interaction between golfer biomechanics and the physical properties of golf clubs. A three-dimensional, six degree-of-freedom biomechanical model of a golfer, a Rayleigh beam model of a flexible club, an impact model based on volumetric contact, and a spin-rate dependent ball flight model have been integrated to dynamically simulate a golf drive. Data from a golf swing motion capture experiment with ten elite golfers was used to validate various components of the golf drive model. Using the flexible club model in full-swing simulations driven by experimental grip kinematics, the simulated shaft deflections matched the motion capture experiment with a high level of accuracy. In the same simulations, the grip forces were obtained via inverse dynamics. The simulated grip forces showed that the majority of the grip force at impact is centripetal, and very little torque is applied about the shaft axis throughout the golf swing. The impact model was added to the multibody framework so that impact effects from the shaft and golfer could be investigated. Parameter identification was performed using full-club impact simulations initialized at the moment of impact and driven by extrapolated grip forces. Using a training dataset, the differences between the simulated and experimental ball velocity and angular velocity were minimized, and the impact model was validated against a test dataset. In a simulation experiment, the shaft was removed from the impact model to examine the validity of a long-held assumption in golf science -- that the impact is accurately modelled as a free-body collision between the clubhead and ball. Comparing free-body and full-club impact simulations, the shaft was shown to create a stiffening effect that resists the twisting of the clubhead during contact, corresponding to a significant increase in ball speed and a suppression of the gear-effect. To validate the biomechanical model, a custom optimization routine combining genetic and search-based algorithms was implemented to maximize carry distance. Comparing the simulated grip kinematics to the motion capture experiment, the biomechanical model effectively reproduced the motion of an elite golf swing. The golf drive model was used to investigate the complex interaction between clubhead mass, the golfer's ability to generate clubhead speed, and impact efficiency. By varying clubhead mass, it was shown that a golfer can potentially generate greater ball speed with a lighter clubhead. This simulation experiment, among others conducted in this work, demonstrate the model's ability to provide valuable insights relating to golfer biomechanics and equipment performance.