Characterizing the Role of Phospholamban in Duchenne Muscular Dystrophy 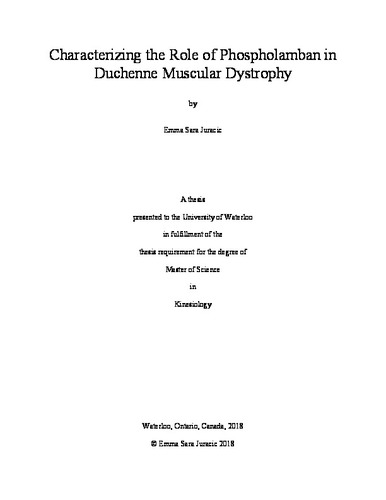 Duchenne muscular dystrophy (DMD) and the murine model, mdx, are recessive X-linked myopathies characterized by aberrant Ca2+-handling resulting in muscle atrophy and weakness. Phospholamban (PLN) is a protein inhibitor of sarco(endo)plasmic reticulum Ca2+-ATPases (SERCAs) that physically interacts with SERCA to regulate Ca2+-handling. Targeted therapy to improve SERCA function is a proven strategy to alleviate DMD in mdx mice.  In this study, Pln-/- mice were crossed with mdx mice to generate mdx/Pln-/- double knockout mutant mice.  Since PLN inhibits SERCAs, it was hypothesized that PLN ablation would mitigate Ca2+ dysregulation and rescue the dystrophic phenotype. Soleus and diaphragm muscles from WT, mdx/Pln+/+ and mdx/Pln-/- mice were excised to determine differences in the muscle morphology and functionality. Histological analysis revealed stark increases in the proportion of centralized nuclei and collagen invasion in mdx/Pln-/- and mdx mice compared to WT, however, there were no differences in these markers between mdx groups. Immunofluorescence staining demonstrated that both soleus and diaphragm from mdx/Pln-/- mice shifted towards type IIB and type IIX fibre types, as the proportion of these fibres were significantly greater than mdx/Pln+/+ and WT. This shift was accompanied by increased cross sectional area of type IIB fibres in mdx/Pln-/- compared to mdx/Pln+/+. Western blotting analysis of soleus and diaphragm muscle homogenate showed an increase inexpression of the SERCA regulator, sarcolipin (SLN), in both mdx groups relative to WT, however, there was a significant decline in SLN content in mdx/Pln-/- compared to mdx/Pln+/+. Additionally, there was a significant elevation in PLN content in mdx/Pln+/+ relative to WT in the soleus muscle. The solei of mdx/Pln+/+ and mdx/Pln-/- mice exhibited a significant reduction in force production compared to their WT counterparts at all frequencies when normalized to cross sectional area.  Unexpectedly, the force generated by mdx/Pln-/- soleus was significantly decreased at all stimulation frequencies when compared to mdx/Pln+/+. Furthermore, there was a significant reduction in soleus and diaphragm Ca2+ uptake in both the mdx/Pln+/+ and mdx/Pln-/- groups compared to WT, and surprisingly the rate of Ca2+ uptake was significantly lower in mdx/Pln-/- muscles compared with mdx/Pln+/+. Interestingly, while there were differences in SERCA mediated Ca2+ uptake between experimental groups, there were no significant differences in Ca2+- ATPase activity between WT, mdx/Pln+/+ and mdx/Pln-/- groups in the soleus and diaphragm muscles. Overall, these results demonstrate that PLN ablation in the mdx mouse model resulted in a worsening of the disease phenotype, as evident by elevations in centralized nucleation, a reduction in the ability to generate force and impairments in SERCA mediated Ca2+ uptake. These results suggest that PLN could potentially provide stabilization of the SERCA structure and function during oxidative stress.