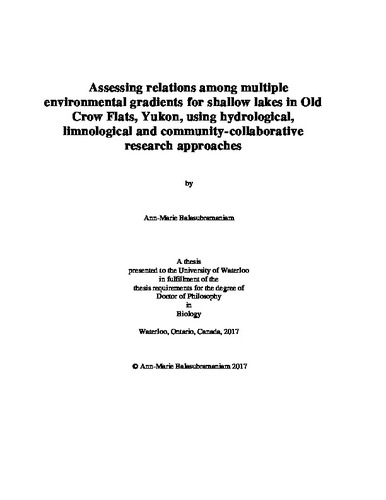 Shallow freshwater ecosystems are undergoing marked hydrological changes associated with a warming Arctic, which causes concern for remote northern communities that access these regions to maintain their traditional lifestyles. Variation in precipitation patterns (snow and rain), due to changing climate conditions has been found to strongly influence lake water balances. However, knowledge of how such changes in precipitation affect limnology and biotic community structure within lakes is lacking. Working collaboratively with the Vuntut Gwitchin First Nation (VGFN), this thesis examines the influence of hydrology on the limnology of shallow lakes in the Old Crow Flats, Yukon. Relations among source-water composition (snow vs. rain), catchment characteristics, limnology, and sediment properties are assessed and their influence on benthic biota are quantified. Results from 56 lakes, sampled during the early, mid-, and late ice-free season of 2007, identify that catchment mediated differences in source waters (snowmelt-dominated, intermediate and rainfall –dominated) are associated with different limnological characteristics and divergent seasonal trajectories. Snowmelt-dominated lakes, which occur in catchments with tall shrubs and trees, have significantly higher concentrations of dissolved phosphorus and organic carbon, relative to the other categories. These lakes exhibit the least amount of seasonal variation in water chemistry variables. In contrast, rainfall-dominated lakes, which are located in catchments with dwarf shrub and sparse vegetation, have significantly higher concentrations of major ions and higher pH. The rainfall-dominated lakes experience the greatest amount of seasonal variation in water chemistry and tend to be more similar to intermediate lakes in mid- and late-season. Interestingly, seasonal analysis of intermediate lakes highlights sensitivity of these lakes to transitioning sources of input water. As the ice-free season progresses, the water chemistry of intermediate lakes changes from resembling snowmelt-dominated to that of rainfall-dominated lakes. The strength of these catchment-mediated hydro-limnological associations is demonstrated by their persistence among years (2007- 2009). Analyses of diatom and chironomid assemblages within surface sediments of a subset of ~49 lakes identifies a cascading influence of input-water sources, on limnology and sediment properties, as mediated by catchment characteristics to affect compositions via direct and indirect pathways. Notably, variance partitioning analyses (VPA) of diatom and chironomid assemblages, identify a substantial amount of shared variation among limnology, sediment properties and catchment characteristics. Given that hydrological processes are the main mechanisms that link catchment characteristics with limnological conditions and sediment properties of lakes, the shared variation is likely primarily attributable to variation in source-water inputs. VPA analyses for both diatoms and chironomids explained less than 50% of variation, which draws attention to the limitations of point-in-time measurements in describing dynamic processes regulating biotic communities. Thus, when describing biotic responses to environmental change within northern aquatic ecosystems, results presented here discourage linking variation in biota to direct effects of any single factor, and rather encourage use of multi-factor analyses that include hydrological processes. As northern communities undergo unprecedented environmental changes associated with climatic and socio-economic stressors, there is an increased impetus for knowledge generation to be focused on community needs to guide policies and adaptation strategies. In response, natural science research in Canada’s North is shifting towards a framework that is collaborative, interdisciplinary and reflective of Northern people’s priorities. The final sections of this thesis explore effective methods for early career researchers (ECRs) to use when engaging in community-collaborative research. A NSERC Northern Research internship, which allowed for an extended stay in the community of Old Crow, is highlighted as it enabled a partnership to be established with the Vuntut Gwitchin Government’s Natural Resource Department (NRD). The discussions among ECRs regarding methods for developing true partnerships with northern communities, which occurred at the 2012 IPY conference, are also highlighted and analyzed. The prevailing themes - dedicating time, being present, communicating in plain-language, listening, respecting and understanding local customs as well as building trust for collaborative efforts and knowledge exchange with communities- are presented along with a list of resources and recommendations to assist ECRs interested in undertaking collaborative research methodology that goes beyond the standard permitting process. Ultimately, by integrating hydrological, limnological, and community-collaborative research approaches, the results presented here improves understanding of the complex ways in which shallow lakes may respond to future hydro-climatic changes, and provides key insights and recommendations to natural scientists interested in pursuing community-based research in Canada’s North.