The production and fate of picoplankton and protozoa in the pelagic food web of Napoleon Gulf, Lake Victoria, East Africa 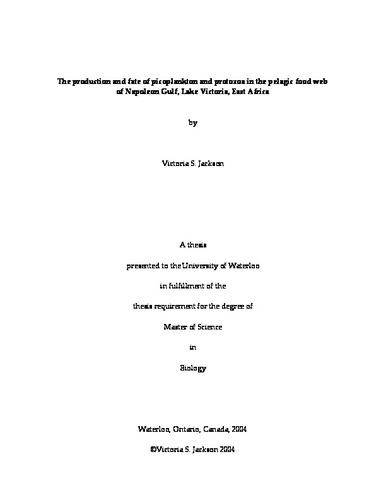 The importance of the microbial food web and how it interplays with the classical food chain has gained considerable attention in temperate lakes. However its role in carbon transfer from pico- and nanoplankton to zooplankton and planktivores is relatively unknown in tropical lakes. Sampling of the microbial food web and experiments to estimate the growth rate and fate of its components were performed in Lake Victoria, East Africa, during the mixing season (May to August) 2002. Bacterioplankton and ciliate densities in Napoleon Gulf ranged from 6. 2 to 14. 9 cells x 10<sup>6</sup>&bull;mL<sup>-1</sup> and 51. 9 to 75. 2 cells&bull;mL<sup>-1</sup>, respectively. Flagellate abundance was high, ranging from 70. 4 to 127. 9 cells x 10<sup>3</sup>&bull;mL<sup>-1</sup>. Small flagellates, tentatively called Choanoflagellida, dominated the flagellate community by abundance and biomass. Bacterial growth rates were low, yet high abundance and cell size resulted in high bacterial production representing 24 to 38% of phytoplankton production. Protozoan growth rates and production are similar to values reported for other African lakes and the Laurentian Great Lakes. Protozoa were the dominant grazers of bacteria with grazing pressure switching from protozoa > 5 µm in June to protozoa < 5 µm (presumably flagellates) in July. In July, grazing on flagellates was from predators < 40 µm, probably ciliates, while the ciliate community was grazed by > 40-µm plankton. Given that plankton of Lake Victoria is dominated by colonial cyanobacteria and raptorial zooplankton, protozoa could be an important pathway in the pelagic food web of Lake Victoria, East Africa.