A Use of the Theory of Planned Behaviour to Determine the Social Barriers to the Implementation of Stormwater Green Infrastructure on Private Properties in Dundas, Hamilton, Ontario 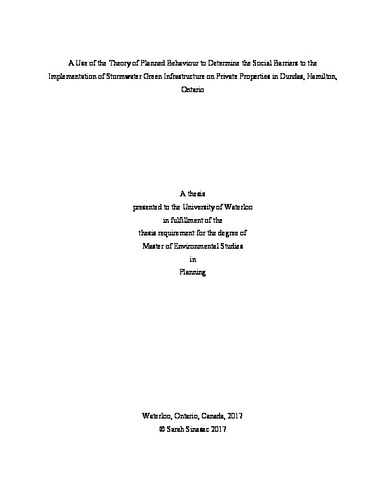 Climate change has resulted in more extreme rainfall events and most municipalities’ stormwater infrastructure is not prepared to deal with the increased flooding instances that may be associated with the increased rainfall. Updating inferior stormwater infrastructure would put a strain on municipalities’ budgets and require space that is not readily available. A potential option for municipalities is to implement green infrastructure options such as green space, green roofs and bioretention swales. Municipalities may be able to construct some green infrastructure options on publically owned space, however most of the responsibility for implementation will fall on private residents. Previous research has investigated methods of motivating private residents in the implementation of green infrastructure, however very little research has been done on whether residents respond to motivation and what the social barriers to implementation are. This project study focused on three neighbourhoods in the Town of Dundas (Hamilton, ON, Canada) as a case study. Dundas is in a position of pronounced flooding risk because of its location at the valley bottom of a break in the Niagara Escarpment and its past history of flooding. Through a partnership with the Hamilton Conservation Authority, this study used a questionnaire to attempt to elucidate the social barriers to the implementation of green infrastructure on private properties. The questionnaire was theoretically informed using the Theory of Planned Behaviour and analyzed using partial least squares path modelling. The results indicated that behavioural beliefs, attitude, normative beliefs, subjective norm and perceived behavioural control all contributed to the participant’s intention to install green infrastructure and ultimately their final behaviour. The model was able to predict 57% of the variance in intention, based on the associated constructs. Subjective norm contributed the strongest to intention with a path coefficient of 0.542. Attitude had the weakest contribution to intention with a path coefficient of 0.034. Individual question results indicated that time and finances were not statistically significant barriers to the implementation of green infrastructure on private properties. A comparison between the neighbourhoods showed no significant differences in questionnaire answers between any of the three neighbourhoods, however there were differences in income and response rate between the three neighbourhoods. The results from this study can be used to help conservation authorities and municipalities develop engagement and education programs to promote the use of green infrastructure on private properties in order to mitigate the negative effects of climate change.

Sarah Sinasac (2017). A Use of the Theory of Planned Behaviour to Determine the Social Barriers to the Implementation of Stormwater Green Infrastructure on Private Properties in Dundas, Hamilton, Ontario. UWSpace. http://hdl.handle.net/10012/12786