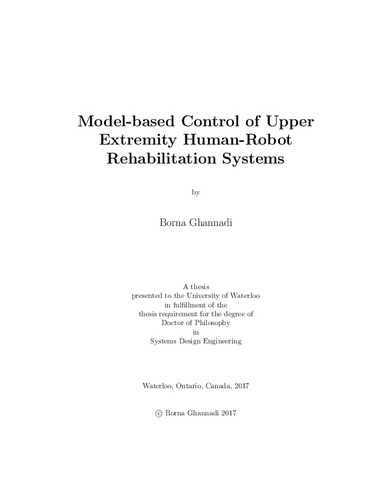 Stroke rehabilitation technologies have focused on reducing treatment cost while improving effectiveness. Rehabilitation robots are generally developed for home and clinical usage to: 1) deliver repetitive and stimulating practice to post-stroke patients, 2) minimize therapist interventions, and 3) increase the number of patients per therapist, thereby decreasing the associated cost. The control of rehabilitation robots is often limited to black- or gray-box approaches; thus, safety issues regarding the human-robot interaction are not easily considered. Furthermore, despite numerous studies of control strategies for rehabilitation, there are very few rehabilitation robots in which the tasks are implemented using optimal control theory. Optimal controllers using physics-based models have the potential to overcome these issues. This thesis presents advanced impedance- and model-based controllers for an end-effector-based upper extremity stroke rehabilitation robot. The final goal is to implement a biomechanically-plausible real-time nonlinear model predictive control for the studied rehabilitation system. The real-time term indicates that the controller computations finish within the sampling frequency time. This control structure, along with advanced impedance-based controllers, can be applied to any human-environment interactions. This makes them promising tools for different types of assistive devices, exoskeletons, active prostheses and orthoses, and exercise equipment. In this thesis, a high-fidelity biomechatronic model of the human-robot interaction is developed. The rehabilitation robot is a 2 degree-of-freedom parallelogram linkage with joint friction and backlash, and nonlinear dynamics. The mechatronic model of the robot with relatively accurate identified dynamic parameters is used in the human-robot interaction plant. Different musculoskeletal upper extremity, biomechanic, models are used to model human body motions while interacting with the rehabilitation robot model. Human-robot interaction models are recruited for model-in-loop simulations, thereby tuning the developed controllers in a structured resolution. The interaction models are optimized for real-time simulations. Thus, they are also used within the model-based control structures to provide biofeedback during a rehabilitation therapy. In robotic rehabilitation, because of physical interaction of the patient with a mechanical device, safety is a fundamental element in the design of a controller. Thus, impedance-based assistance is commonly used for robotic rehabilitation. One of our objectives is to achieve a reliable and real-time implementable controller. In our definition, a reliable controller is capable of handling variable exercises and admittance interactions. The controller should reduce therapist intervention and improve the quality of the rehabilitation. Hence, we develop advanced impedance-based assistance controllers for the rehabilitation robot. Overall, two types of impedance-based (i.e., hybrid force-impedance and optimal impedance) controllers are developed and tuned using model-in-loop simulations. Their performances are assessed using simulations and/or experiments. Furthermore, their drawbacks are discussed and possible methods for their improvements are proposed. In contrast to black/gray-box controllers, a physics-based model can leverage the inherent dynamics of the system and facilitate implementation of special control techniques, which can optimize a specific performance criterion while meeting stringent system constraints. Thus, we present model-based controllers for the upper extremity rehabilitation robot using our developed musculoskeletal models. Two types of model-based controllers (i.e., nonlinear model predictive control using external 3-dimensional musculoskeletal model or internal 2-dimensional musculoskeletal model) are proposed. Their performances are evaluated in simulations and/or experiments. The biomechanically-plausible nonlinear model predictive control using internal 2-dimensional musculoskeletal model predicts muscular activities of the human subject and provides optimal assistance in real-time experiments, thereby conforming to our final goal for this project.