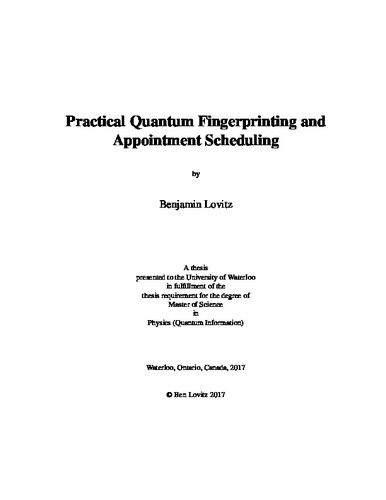 Quantum protocols for many communication tasks have been found which significantly improve on their classical counterparts. However, many of these protocols are beyond the reach of current technology. In this work, we find more readily implementable protocols for the tasks of quantum fingerprinting and appointment scheduling. Our protocols maintain a quantum advantage even under realistic experimental imperfections.   In the task of quantum fingerprinting, two parties wish to evaluate the equality function on two n-bit strings in the simultaneous message passing model. The original quantum fingerprinting protocol uses a tensor product of a small number of O(log n)-qubit highly entangled signals (PRL.87.167902), whereas a recently-proposed optical protocol uses a tensor product of O(n) single-qubit signals, while maintaining the O(log n) information leakage of the original protocol (PRA.89.062305). The low-dimensionality of each signal in the recently proposed optical protocol makes it more amenable to experimental implementation (ncomms9735, PRL.116.240502), but due to limited coherence times the large number of signals remains a significant barrier to observing a quantum advantage in information leakage. In contrast, the original protocol sends few signals, but the dimension of each signal is prohibitively high. We find a family of protocols which interpolate between the original and optical protocols while maintaining the O(log n) information leakage, thus demonstrating a trade-off between the number of signals sent and the dimension of each signal, and opening the door for experimental implementations to find a ``sweet spot'' for which the number of signals sent and the dimension of each signal are both amenable to current technology.   In (ncomms9735, PRL.116.240502) the recently proposed optical protocol is implemented using coherent states. We develop a coherent state protocol which reduces the number of signals by a factor 1/2 from the recently proposed optical protocol, while also reducing the information leakage. We consider several natural generalizations of this protocol to other coherent state protocols which further reduce the number of signals, but find numerical evidence that they have greater information leakage in the ideal setting and also under realistic experimental imperfections. Using a similar technique, we improve a recently proposed coherent state protocol for evaluating the Euclidean distance between two real unit vectors (PRA.95.032337) by reducing the number of signals by a factor 1/2 while also reducing the information leakage. We also extend this protocol to handle complex unit vectors. Along the way, we find a simple beamsplitter measurement to perform optimal unambiguous state comparison between two coherent states.   In the task of appointment scheduling, two parties each have n-bit strings, and they wish to find a common intersection in the interactive communication model. The known quantum appointment scheduling protocol of (arXiv:quant-ph/9802040) performs this task with O(sqrt(n)log(n)) qubits of communication, a nearly quadratic improvement over the classical lower bound of Omega(n) bits. However, this protocol requires quantum states of high dimension and global unitary operations. We find appointment scheduling protocols which are more feasible for implementation and maintain a quantum advantage over the classical lower bound in terms of information cost, even under experimental imperfections. Our main protocols require the generation of coherent states of a fixed set of amplitudes, along with phase shifters and beamsplitters on two modes with relatively low splitting angle. They also require the parties to transfer two modes back-and-forth multiple times with relatively low loss. Although our protocols make progress towards the experimental implementation of quantum appointment scheduling, we expect that they still remain outside the scope of current technology.