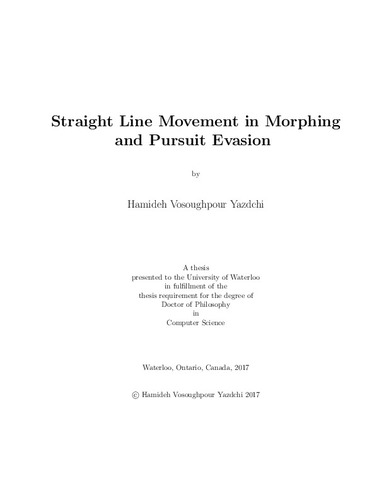 Piece-wise linear structures are widely used to define problems and to represent simplified solutions in computational geometry. A piece-wise linear structure consists of straight-line or linear pieces connected together in a continuous geometric environment like 2D or 3D Euclidean spaces. In this thesis two different problems both with the approach of finding piece-wise linear solutions in 2D space are defined and studied: straight-line pursuit evasion and straight-line morphing. Straight-line pursuit evasion is a geometric version of the famous cops and robbers game that is defined in this thesis for the first time. The game is played in a simply connected region in 2D. It is a full information game where the players take turns. The cop’s goal is to catch the robber. In a turn, each player may move any distance along a straight line as long as the line segment connecting their current location to the new location is not blocked by the region’s boundary. We first prove that the cop can always win the game when the players move on the visibility graph of a simple polygon. We prove this by showing that the visibility graph of a simple polygon is “dismantlable” (the known class of cop-win graphs). Polygon visibility graphs are also shown to be 2-dismantlable. Two other settings of the game are also studied in this thesis: when the players are free to move on the infinitely many points inside a simple polygon, and inside a splinegon. In both cases we show that the cop can always win the game. For the case of polygons, the proposed cop strategy gives an asymptotically tight linear bound on the number of steps the cop needs to catch the robber. For the case of splinegons, the cop may need a quadratic number of steps with the proposed strategy, while our best lower bound is linear. Straight-line morphing is a type of morphing first defined in this thesis that provides a nice and smooth transformation between straight-line graph drawings in 2D. In straight- line morphing, each vertex of the graph moves forward along the line segment connecting its initial position to its final position. The vertex trajectories in straight-line morphing are very simple, but because the speed of each vertex may vary, straight-line morphs are more general than the commonly used “linear morphs” where each vertex moves at uniform speed. We explore the problem of whether an initial planar straight-line drawing of a graph can be morphed to a final straight-line drawing of the graph using a straight-line morph that preserves planarity at all times. We prove that this problem is NP-hard even for the special case where the graph drawing consists of disjoint segments. We then look at some restricted versions of the straight-line morphing: when only one vertex moves at a time, when the vertices move one by one to their final positions uninterruptedly, and when the edges morph one by one to their final configurations in the case of disjoint segments. Some of the variations are shown to be still NP-complete while some others are solvable in polynomial time. We conjecture that the class of planar straight-line morphs is as powerful as the class of planar piece-wise linear straight-line morphs. We also explore a simpler problem where for each edge the quadrilateral formed by its initial and final positions together with the trajectories of its two vertices is convex. There is a necessary condition for this case that we conjecture is also sufficient for paths and cycles.