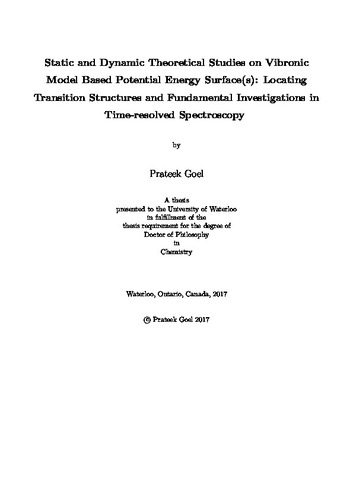 Construction and exploration of Potential Energy Surfaces (PES) is central to the study of many interesting chemical phenomena, such as computing the rate of a chemical reaction or elucidating structure of a complex molecule. Locating a transition state structure on a PES is an important problem as it provides a qualitative as well as quantitative understanding of reaction rates and mechanisms. A powerful example of this is the celebrated Transition State Theory (TST). Finding a transition state structure is a nontrivial and challenging task for reasons such as the lack of a good starting geometry or the PES having complicated topological features. The problem of characterizing critical points on a PES can be classified as "static" approaches to understand chemical structure and reactivity. When the interest lies in understanding dynamical processes, one needs to solve the time-dependent Schr¨odinger equation (TDSE). Although solving TDSE contains more "Physics", however, it also becomes harder to interpret the complex information it carries and to provide simple answers. In this work, an attempt has been made on both static and dynamic fronts to address problems of fundamental importance, while proposing new and unconventional solutions to these problems. In first part of the thesis, a strategy to locate transition states using the vibronic model based PES has been proposed, implemented, and tested on a primary test set of unimolecular reactions. The approximate representation of the ground state PES using vibronic model serves as a powerful tool for transition state search by providing cheap means to compute the gradient and hessian on the PES, which are essential (or desirable, in particular the hessian) quantities for geometry optimization techniques. On the dynamic front, in second part of the thesis a new scheme for time-dependent photoelectron spectroscopy has been proposed, denoted as pump-repump-cwphotoelectron spectroscopy (PRP-CW-PES), which provides vibronically resolved fingerprints for a series of time-delay between pump-and repump pulses. In principle, the proposed scheme can be used to distinguish between closely related molecular structures, and can also serve as a new tool to study wave packet interferometry (WPI). The basic theory of the proposed scheme is outlined with application to simple model systems. Attention of the experimental community is called for realization of the experiment in the laboratory.