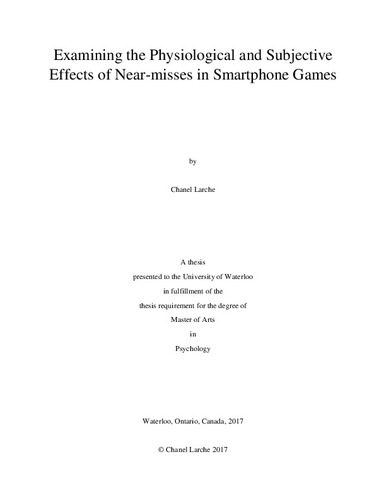 Like many gambling games, the exceedingly popular and lucrative smartphone game “Candy Crush Saga” features near-miss outcomes. In slot machines, a near-miss involves getting two of the needed three high-paying symbols on the pay-line (i.e., just missing the big win). In Candy Crush Saga, the game signals when you just miss getting to the next level by one or two moves. Because near-misses in gambling games have consistently been shown to invigorate play despite being frustrating outcomes, the goal of the present study was to examine whether such near-misses trigger increases in player arousal, frustration and urge to continue play in Candy Crush. Sixty avid Candy Crush Saga players were recruited to play the game for 30 minutes while having their Heart Rate, Skin Conductance Level, subjective arousal, frustration and urge to play recorded for three types of outcomes: wins (where they level up), losses (where they don’t come close to levelling up), and near-misses (where they just miss levelling up). Near-misses were more arousing than losses as indexed by increased heart rate and greater subjective arousal. Near-misses were also subjectively rated as the most frustrating of all outcomes. Most importantly, of any type of outcome, near-misses triggered the most substantial urge to continue play. These findings suggest that near-misses in Candy Crush Saga play a role in player commitment to the game, and may contribute to players playing longer than intended.