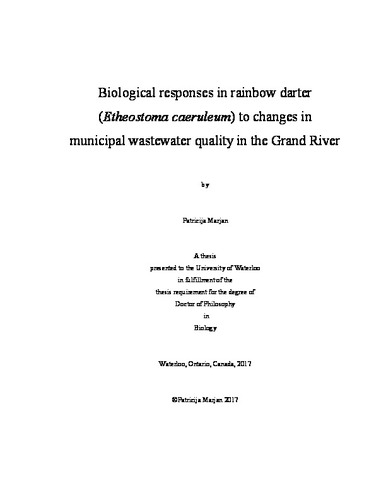 This thesis is a synthesis of studies that explore the effects of urbanization on a small-bodied fish species, rainbow darter (Etheostoma caeruleum), in the central Grand River (Ontario, Canada) over time. This watershed has been exposed to various human activities that have deteriorated water quality and adversely affected aquatic organisms. Point-source contaminants are discharged through two municipal wastewater treatment plants (MWWTP) associated with major urban centres (Waterloo and Kitchener). It is well documented that municipal effluents contain contaminants with endocrine disrupting potency. Effluents discharged in the Grand River contain a diversity of estrogenic, anti-androgenic compounds and pharmaceuticals, with various therapeutic activities. Previous research has shown an association between biological responses indicative of endocrine disruption and exposure of rainbow darter to municipal effluents in the Grand River. These responses range from the molecular level all the way to whole organism responses. To improve river water quality and meet new federal effluent quality guidelines, the local municipality (Region of Waterloo) decided to invest in upgrading the two treatment plants. The major upgrades (e.g., nitrification) were initiated at the Kitchener plant in late 2012 while the upgrades at Waterloo were delayed. This created a unique opportunity to design a series of experiments with the main goal to investigate whether responses in rainbow darter previously detected with effluent exposure (e.g., suppressed sex steroid production) would return to reference levels following upgrades in wastewater treatment. Building on multiple years of studies, changes in these endpoints were assessed in the context of spatial and temporal variability in the watershed. The hepatic transcriptomics in rainbow darter was assessed using a custom microarray to determine molecular responses across an urban environment, with emphasis on changes in MWWTP effluent quality and exposure. The importance of reference site selection on interpretation of omics data was also evaluated. Rainbow darter were collected from nine sites located at different distances from the Waterloo and Kitchener MWWTPs in the central Grand River during the fall season of 2013. Hepatic transcriptome responses indicated that fish collected below Waterloo had the most distinct gene expression profile compared to fish from other sites (including those collected below the outfall of the recently upgraded Kitchener MWWTP). Further, this study concluded that reference site selection matters more when fish are exposed to minor anthropogenic pollution. In contrast, reference site selection has less impact on transcriptomic responses in fish exposed to highly polluted sites. Anthropogenic inputs from MWWTPs can thus be captured in the rainbow darter liver transcriptome and these responses can inform future assessments of stressors. The hepatic transcriptome responses in rainbow darter below the two MWWTPs were also examined over time encompassing a pre-upgrade period (2011 - 2012) and a post upgrade period (2013 - 2014). Conducting transcriptomic studies in long-term field-based settings is quite challenging due to uncertainties arising from changes in the ecosystem structure and environmental factors that confound the potential effects of the stressor of interest (wastewater outfalls). Quantitative gene expression analyses (number of significantly different transcripts) were not always reflective of the changes that occurred in effluent quality (upgrades). In contrast, qualitative analysis of selected transcripts and functional analysis of genes involved in different biological pathways suggested that fish responded to the implemented upgrades and improved effluent quality. Following the upgrades, rainbow darter below the Kitchener MWWTP had fewer pathways that were significantly altered in the liver. Moreover, the pathways become more divergent from the Waterloo fish with which they shared great similarities in functional pathways prior to upgrades (2011 - 2012). In the final study, changes in in vitro steroid production in rainbow darter males was compared at sites over six years covering the period of time when the Kitchener MWWTP upgrades were implemented. Rainbow darter were collected from ten sites in the central Grand River located at different distances from the Waterloo and Kitchener MWWTPs in the fall season from 2013 to 2016 (post-upgrades) and compared with samples collected and analysed from 2011 to 2012 (pre-upgrades). Despite high variability in the ability of individual fish to produce sex steroids, the results of this study suggested that 11-ketotestosterone in fish collected below Kitchener MWWTP following the upgrades gradually recovered and 11-ketotesosterone returned to comparable levels to that measured in fish collected at reference sites. In contrast, fish collected below the Waterloo MWWTP, a site that underwent minor changes, displayed an apparent recovery in 11-ketotestosterone and still remained significantly below the reference level in the final years of the study. Testosterone production showed less consistent patterns compared to 11-ketotestosterone and it was more difficult to determine whether this steroid recovered in response to the upgrades. The results in this thesis advanced our knowledge regarding rainbow darter responses in a system that went through dynamic changes that resulted in an overall quality improvement. However, these results were also critical to the general understanding of the application of (transcript)omics information into field-based ecotoxicology and provide substance for transcriptomic advancement in regulation. Studying transcriptomic responses across an environmental gradient with multiple reference sites allowed for deeper assessment and quantitation of the transcriptome, and in highly impacted sites, there was considerable consistency in interpretation of responses associated with anthropogenic activities. Moreover, application of transcriptomics methods in a longer-term field-based setting demonstrated that qualitative gene expression analyses (Gene Set Enrichment Analysis and Sub Network Enrichment Analysis) may be more informative than quantitative analysis for the interpretation of responses associated with changes in the environment. Despite considerable natural variability, in vitro steroid production was found to be a useful endpoint that responded to wastewater treatment plant effluent quality. Changes in gene expression and steroid production can be viewed as key events responsive to stressors in fish and have a great potential to be studied within the context of an adverse outcome pathway. Taken together, the findings and conclusions derived from these studies have implications beyond the Grand River watershed, and they provide strong foundation for understanding that can be transferred to other fish species similar to rainbow darter.