“We call them Tracht”: Transcultural Positioning through Code-Switching and Repair 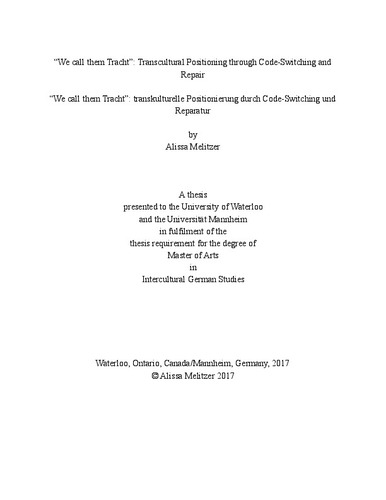 This thesis examines instances of language alternation and code-switching in the context of recorded face-to-face interviews. The participants in this study include two groups: German speaking immigrants who left Europe to settle in Canada as well as the children of these immigrants. Conversation analysis and interactional sociolinguistics are used as methods of analysis with a focus on how instances of language alternation and code-switching are oriented to (or not oriented to) through the conversational mechanism of repair and how these repairs are treated by interactants. Using positioning and identity theory, the aim is to further explore how individuals who have knowledge influenced by multiple cultures and languages position themselves and their interlocutors with respect to their cultural experiences. Another key focus is the role that positioning plays in the construction of transcultural identities. From this, the research questions address how interactants deal with “cultural knowledge gaps” between themselves and how in dealing with these gaps cultural identities are made relevant, and thus visible, interactionally. The results of this research show first that a distinction can be made between language alternation and code-switching that is based on interactants’ orientation to the use of more than one language within an interaction. It is also clear that through the repair impacting some code switches, interactants addressed, and in many cases bridged, the cultural knowledge gaps which had been identified within the interaction. The results of this study are relevant to the question of how researchers can define and approach code-switching as a conversational phenomenon. In addition to this, repair as it is used as a tool by speakers to construct transcultural identities has meaningful implications for research in the field of sociolinguistics, in particular within the context of migration and cultural identity.