Influence of graminoid species identity on carbon exchange in a restored peatland in central Alberta, Canada 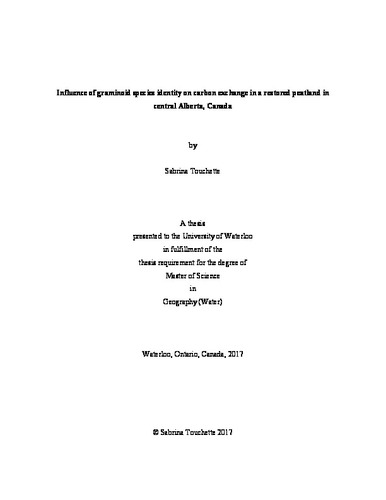 Peatlands are globally important ecosystems for carbon sequestration. Commercial extraction of peat layers alters the ecosystem services provided by pristine peatlands. One metric of peatland restoration is recovery of this carbon sink function. As peat extraction changes peat layer properties, the hydrology and nutrient availability are altered. Therefore, the new conditions on site may not be favourable to the establishment of mosses, responsible for slow peat accumulation, but more suitable for the establishment of vascular plants, such as graminoids. Graminoids are known to be strongly represented in the species pool of restored peatlands. Land-atmosphere models have characterized the interaction between autogenic properties of natural peatlands and carbon accumulation processes. To represent the vegetation composition, the use of plant functional types (PFTs) grouping the main plant communities, according to their productivity characteristics, rooting characteristics and litter quality, is often used. In the case of restored peatlands, the species pool diversity, autogenic processes and carbon cycling are different than natural peatlands. Therefore, I questioned if the graminoid species are similar enough at the species level when evaluating their carbon dioxide (CO2) and methane (CH4) exchange to be grouped as a single PFT. As the peat hydrological functions are altered post-extraction, I also questioned how graminoid species distribution and carbon exchange function were affected by water table position. This study was conducted in a restored peatland in central Alberta, where five graminoid species were targeted: Beckmannia syzigachne (B.syz), Calamagrostis canadensis (C.can), Carex canescens (Cx.can), Eriophorum vaginatum (E.vag) and Scirpus cyperinus (S.cyp). All species were representative of the ‘wet’ section of the site, where they were compared at first within similar hydrologic conditions. To evaluate the impact of hydrologic heterogeneity on carbon exchange, species were also targeted in the ‘dry’ section of site, which includes C.can, Cx.can and E.vag. Quadruplicate plots were installed for the targeted species, and for both section. Both CO2 and CH4 flux measurements were conducted with the closed chamber technique during the growing season (May – September, 2016). A vegetation inventory, biomass production, and litter accumulation and decomposition rates were also measured to assess the species’ plant productivity. A grid of wells and piezometers were installed and used to measure the hydrologic conditions. When evaluating the correlation between the graminoid species distribution and the water table spatial variability, we found that presence of species was partly controlled by the water table position. The correlation between graminoid distribution and water table was greater for all graminoids combined and for C.can than for E.vag or Cx.can. The results show a significant difference between the graminoid species for their CO2 exchange. S.cyp and E.vag were found to sequester the most CO2 compared to B.syz, C.can and Cx.can. S.cyp and E.vag were also the species with the largest plant cover, which seems to relate to this higher carbon accumulation. Species CO2 uptake differed also across the perennial stages of plants. When comparing the same species, but under different hydrologic conditions, species in the wet section were not significantly different from the dry. Methane flux was not found to be species controlled, but rather varied seasonally, where fluxes increased towards the end of the season with E.vag and S.cyp having significantly higher fluxes during this period. When considering the section of site, CH4 emissions significantly increased under a shallow water table, with E.vag in the wet having the highest fluxes. Our results support the idea that graminoid species are abundant on restored peatlands under shallow water table positions and that species show enough difference in their CO2 and CH4 exchange that they should not be considered as a single PFT. However, more research is needed to assess the distribution and function of other graminoid species in restored peatland.