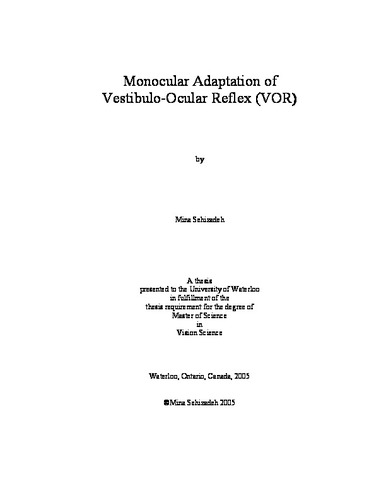 Purpose: This study asks whether active horizontal angular Vestibulo-Ocular Reflex (VOR) gain is capable of monocular adaptation after 4 hours of wearing 10 dioptres (D) of induced anisometropia in healthy human adults. Method: The participants (average age 28 years) wore a contact lenses/spectacles combination for 4 hours. The power of the spectacle was +5. 00D (magnified images 8. 65%) in front of the right eye and ?5. 00D (minified images 5. 48%) for the left eye, while the power of the contact lenses was equal to the subjects? habitual correction, summed with the opposite power of the spectacle lens. Eye and head position data was collected in complete darkness, in one-minute trials before adaptation and every 30 minutes for 2 hours after adaptation. Eye and head position data obtained using a video-based eye tracking system, was analyzed offline using Fast Fourier Transform in MATHCADTM 11. 1 software to calculate VOR gain. The VOR gain was compared between the right eyes and left eyes for the trials before and after adaptation. Results: In the first post-adaptation trial, a significant decrease in VOR gain (? 6%) occurred in the left eye in response to the miniaturizing lens. The right eye VOR gain did not show a significant change in the first post-adaptation trial (?2% decrease). During the remaining trials in the 2 hour follow-up time, both eyes showed a significant decrease compared to the baseline trial. This might indicate habituation of the VOR from repeated testing, or fatigue. Conclusion: There was monocular adaptation of VOR in response to the combined contact lenses/spectacles, but it was not complete and it was not as we expected. However, trying different amounts of anisometropia in one or two directions, a longer adaptation period (more than 4 hours) or monitoring the gain for more than 2 hours after adaptation with a longer separation between trials, might show different results.