Smoking Cessation among Young Adult Dual Users of E-cigarettes and Tobacco Cigarettes in a Mobile Phone Intervention: Analysis of Data from a Randomized Controlled Trial 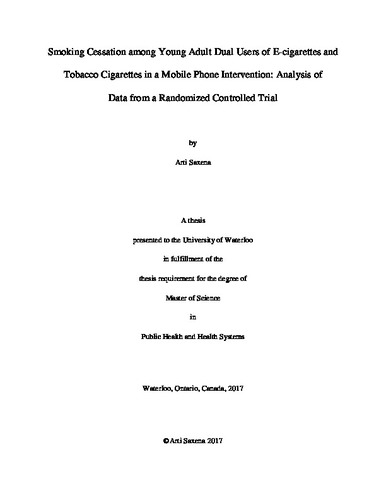 Background Dual-use of electronic (e-cigarettes) and tobacco cigarettes has increased in the past few years (Czoli et al., 2015) without evidence of it being effective as a smoking cessation aid (Manzoli et al., 2015). Understanding quitting tobacco use while using e-cigarettes continues to be a public health priority. There are limited studies, especially from Canada, that examine smoking abstinence among young adult e-cigarette users and non-users. This study examined the relationship between e-cigarette use and smoking cessation over a six-month period. Methods Secondary analysis of longitudinal data obtained from a randomized controlled trial survey for Crush the Crave (CTC), a smartphone-based cessation intervention, was conducted with a sample of 851 Canadian young adult smokers. Persistent e-cigarette use (within the trial) was defined as using e-cigarettes at both baseline and 6-month follow-up. Use of e-cigarettes only at baseline or at follow-up was defined as transient use. Non-users did not use e-cigarettes at either baseline or follow-up. People who ever used nicotine-containing e-cigarettes were also compared for 30 and 7-day point prevalence abstinence at 6 months. Socio-demographic, psychological and quit support usage predictors were also examined. Using logistic regression, odds ratios were calculated for the rates of cessation achieved for all e-cigarette user categories before and after controlling for potential confounders. Results Dual users who continued to smoke at 6-month follow-up survey (persistent e-cigarette users) had a lower 30-day cessation rate than transient or non-users (13% vs 23% and 29%, respectively). This was validated by the odds ratio, non-users being three times more likely to quit than persistent users, even after adjusting for other predictors (OR=3.2, 95% CI [1.41-7.40], p<0.01). Smokers with high self-efficacy were about twice as likely to quit than people with low efficacy (OR=1.92, 95% CI [1.14–3.21], p<0.05), even after adjusting for presumed causes of cessation. The majority of persistent e-cigarette users perceived e-cigarettes as a quit aid (χ2=5.70, p<0.05) and had high self-efficacy to quit at follow-up (χ2=15.5, p<0.01). No statistically significant results were found for other predictors. Conclusion Persistent use of e-cigarettes, across the course of study, was associated with a lower rate of smoking cessation while transient use of e-cigarettes and no use of e-cigarettes was associated with a higher rate of cessation for a young adult population of smokers intending to quit smoking.